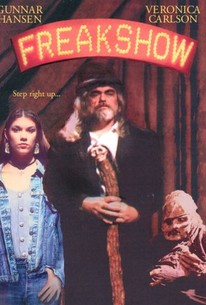 This horror anthology starts out with a young man and his girlfriend visiting a circus sideshow. At one of the attractions they meet a man who calls himself the Freakmaster. He tells them four horror stories, among them one about a witch who takes her revenge on a man who made her sister commit suicide and another about a boy who is adopted by a clan of hillbilly cannibals.

Rand Courtney
as Kid No. 1

Patrick Baxley
as Kid No. 2

Super Chris
as Burke
View All

There are no critic reviews yet for Freakshow. Keep checking Rotten Tomatoes for updates!

There are no featured audience reviews yet. Click the link below to see what others say about Freakshow!