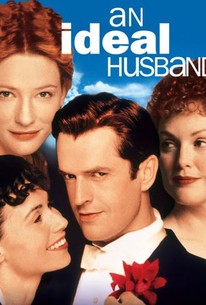 Critics Consensus: Brevity is the soul of wit, eh? This adaptation gets to the nitty gritty of Wilde's stage piece and plays on eternal human foibles.

Critics Consensus: Brevity is the soul of wit, eh? This adaptation gets to the nitty gritty of Wilde's stage piece and plays on eternal human foibles.

Critic Consensus: Brevity is the soul of wit, eh? This adaptation gets to the nitty gritty of Wilde's stage piece and plays on eternal human foibles.

In a moment of youthful indiscretion, Sir Robert Chiltern provided an Austrian baron with secret Foreign Office information. As payment he received the money that became the basis of his fortune and of his splendid, otherwise unimpeachable government career. Years later, he is blackmailed by a mysterious woman who also happens to be an acquaintance of his wife. Seeking the advice of his best friend, Sir Chiltern is told to confess everything to his wife and seek her support, but he refuses to tarnish the ideal image he believes his wife has of him and their marriage. His refusal to tell his wife has severe consequences as she becomes as much of threat to his position as the blackmailer.

Stephen May
as Burlington

John Thompson
as The Speaker
View All

News & Interviews for An Ideal Husband

View All An Ideal Husband News

Critic Reviews for An Ideal Husband

Parker's shuttlecock technique only succeeds in throwing Wilde's cascading rhythms seriously out of whack and makes it hard to attend to the language as fully as one would like.

The bright, crisp design, Wilde's arch eloquence and a classy company help to camouflage the shortcomings.

An enjoyable, minor, lustrously shot revamping of Oscar Wilde's play about the perpetually interlocked manners of love and deception.

Smooth-flowing direction, a shrewdly pruned script and a top-flight ensemble cast that visibly relishes both the dialogue and one another's perfs make this a tony item for upscale, mature audiences.

Parker has made a sensible cinematic translation of Wilde's play, intercutting scenes which would have been played consecutively on the stage.

[I]t's likely that Mr. Wilde, who once wrote, 'A poet can survive anything but a misprint,' would have been less than thrilled with the result.

Quality comedy with a sprinkling of romance, skilfully assembled by a director with a clear feel for the material. Performances are universally great and the dialogue, of course, is superb.

It's lavish, clever entertainment, a welcome opportunity to laugh without shame.

It's a pleasant diversion but sadly, little more than a chance to hear Rupert's barbed wit.

The exquisite teamwork and byplay make the film such a delight to watch.

All the other performances -- from Cate Blanchett, Minnie Driver, Julianne Moore, John Wood and Peter Vaughan -- are first rate.

Certain stretches truly sparkle, but the movie is not as inventive as The Winslow Boy, nor as relaxed and goofy as Midsummer[night's Dream].

Audience Reviews for An Ideal Husband

Comedy about a 19th C. MP whose marriage comes under threat by blackmail

everyone is good but Rupert Everett is brilliant!

Witty, charming and fun. See it once and you never really need to see it again.