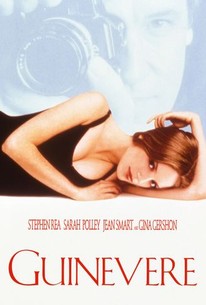 Screenwriter Audrey Wells (best known for The Truth About Cats and Dogs) makes her directorial debut in this film about an unusual May-November romance. Harper Sloane (Sarah Polley) is a 20-year-old woman who has never felt particularly comfortable or important within her family. While suffering through her older sister's wedding reception, she meets Connie Fitzpatrick (Stephen Rea), a 50-ish photogapher hired to take pictures of the wedding. They talk a bit and Connie snaps Harper's picture; when he sends her a copy of the result, she decided to pay him a visit, which turns out to be the first step in a serious relationship. However, Harper soon discovers this is neither casual or unusual for Connie; he has a long history of five-year relationships with younger women who eventually outgrow him, and as Connie tries to bring out Harper's potential, she becomes more keenly aware of the dead ends and loose threads of his life. Guinevere boasts a strong supporting cast, including Jean Smart, Paul Dooley, Gina Gershon, Jasmine Guy and Gedde Watanabe.

Brian Frank
as Wedding Guest No. 1

Debra Engle
as Wedding Guest No. 2

Guinevere is not perfect... But the movie's heart is in the right place.

Gives us a working relationship in progress rather than the usual Hollywood sitcom.

...a story about bad love - and how, sometimes, that is exactly what we needed at the time.

Polley immediately zeroes on Harper's insecurities and quiet fears and brings them delicately to the surface.

A thematically rich exploration of a May-December relationship.

I admire the filmmakers because they steadfastly refused to tack on a Hollywood ending.

Its intelligent examination of the girl-man romantic dynamic is a refreshing change of pace.

A totally unbelievable coming of age love story told from the female's perspective.

A film that might have survived with a little integrity drowns in its own silly soapsuds.

As inert as outer space.

This is the best acting in a completely insincere film I think I've ever seen.

Couple of great actors in what is essentially a silly little movie. The romance seems forced. Yes, back to the original point. A wee bit silly.