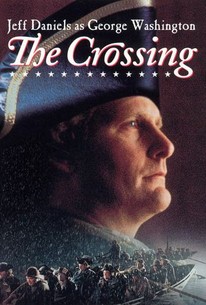 Adapted by screenwriter Howard Fast from his own fact-based novel, this historical drama tells the story of one of the most unexpected triumphs of the American Revolutionary War. In December 1776, the armies of General George Washington (Jeff Daniels) are near the point of collapse; short on money and supplies, ravaged by disease, their numbers thinned by desertion, and freezing in summer uniforms in the midst of a brutal winter, it seems all but impossible that the Colonial Army can hold out much longer against the British Army and their allied German Hessian forces. With imminent defeat a clear possibility, Washington and his troops organize for an audacious surprise attack against the British soldiers on Christmas Day, hinging on the crossing of the freezing Delaware River in the middle of a storm. Co-starring Roger Rees, The Crossing was produced for broadcast by the Arts and Entertainment cable television network.

Critic Reviews for The Crossing

Even though we know how it all ends, there are moving moments to be found here...

Audience Reviews for The Crossing

A well executed docudrama, and apparently a slightly controversial look at George Washington. Jeff Daniels (George Washington) not only gives a really good performance here, he even looks very much like how I would picture the man. The authenticity of the costumes, and battle movements, also add to the appeal of this film. Students of military history should find this very interesting.