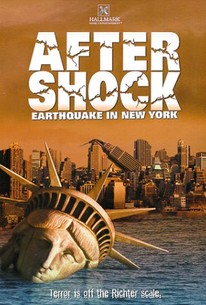 New York, the City That Never Sleeps, is trapped in a nightmare of horror and destruction when a massive earthquake rocks the unsuspecting city. Countless lives are lost, families are torn apart, and chaos runs rampant as the Mayor (Charles S. Dutton) and former Fire Chief (Tom Skerritt) race to enact a city-wide emergency plan. The two men also face personal devastation and uncertainty as their own family members lie buried in the toppled infrastructure. Sharon Lawrence, Lisa Nicole Carson and Cicely Tyson also star in this incredible story of undying courage in the face of unimaginable human tragedy.

There are no critic reviews yet for Aftershock: Earthquake in New York. Keep checking Rotten Tomatoes for updates!

This movie was really good, even though it was sad to see all those people go through such a horrible disaster.