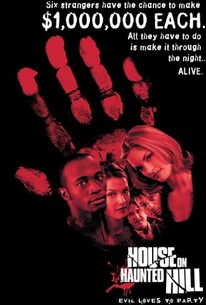 In this remake of William Castle's campy 1958 classic, an eccentric millionaire named Steven Price invites a diverse group of people to a reputedly haunted mansion that was formerly the site of an insane asylum. Steven offers his guests $1,000,000 each if they can spend the entire night at the old house without fleeing in terror. It sounds simple enough, but when those stories about ghosts haunting the mansion turn out to be true, the guests may no longer opt to stick around. In this version, Steven is played by Geoffrey Rush, and his guests include Jeffrey Combs, Taye Diggs, Peter Gallagher, Chris Kattan, and Bridgette Wilson; Famke Janssen plays Evelyn Price. Sadly, this remake does not feature the original's memorable special-effects gimmick, "Emergo," an inflatable plastic skeleton that rolled on wires through the theater during showings.

Peter Graves
as Himself
View All

[It's] hard to come down too harshly on this remake.

The mix of laughs, shocks and gruesomeness is much the same as in the two Tales from the Crypt movies, but Malone coaxes a slightly fresher flavour, taking on board the influence of David Fincher and even Lars von Trier.

Consistently inert -- even though the fee for successful housesitting has been raised to a million bucks a night.

Paints its characters in strokes so broad just one would cover a barn, and, in the end, indulges in lame, dull digital effects that would put a 5-year-old to sleep.

House on Haunted Hill is a sorry reincarnation of the 1950s William Castle horror film.

Instead of thrill and chills, it's kills and spills.

Does everything a remake should do: take the concept of the original and do something new with it. The CGI is atrocious, but it's a campy, gory and fun time.

The passage of time hasn't improved this version one iota, although at least home viewers don't have to subject themselves to the lobby posters sporting that year's daftest tagline ("Evil Loves To Party").

House on Haunted Hill has a great first act and a handful of decent moments making it worth a watch, especially if you were weaned on '90s horror.

To compensate for any real spooks, there are some solid gore effects and stellar set pieces.

In our post-torture-porn era of gloom and doom, its ebullience feels like a breath of fresh air.

The climactic house-versus-humans scenes were so ludicrous that I half expected Kattan to revert to his Mr. Peepers persona from SNL and start battling the evil inkblot with spat-out chunks of apple.

The House on Haunted Hill remake is a decent remake of a classic film. The film has a decent enough cast and director William Malone crafts a chilling, gory ride with this remake. The remake is not bad for what it is, and I've seen worse. For a horror remake, it's quite decent and entertaining. The film isn't as bad as other remakes, but it lacks the power of the original of course. The film relies on the gore factor, and that's really the standout of the film. The film really doesn't offer anything that great, but is pretty gory. S, if you love gory horror films, then this film is for you. The cast are decent at best, with some questionable castings decisions such as Chris Kattan. This isn't an awful remake, but it's nowhere near the original. I very much enjoyed the original However; this is pretty decent, considering the amount of bad horror remakes that came in the years following this films release. The film like I said offers plenty of gore and will appeal to gore fans. However, in terms of good scares, like the original offered, this remake is fairly weak in offering good, effective scares. There are some tense moments here and there, but never anything really scary. This is a mildly entertaining film that offers a decent viewing experience for horror fans. However in the end, this is a forgettable horror film, and is a remake that like so many others doesn't live up to the original.

I just remember that this movie wasn't good. That's all.

One of those horror remakes where computer technology is subsituted for scare factor and one spends the length of the project thinking about how you would have done it better.

I watched this in the theater with my bf. He asked me whether I'll be okay or not as this was a ghost movie. I acted brave but got scared while watching this. I must say this seemed very scary when watching this in the theater. But after coming to home, I felt really stupid. Was this entertaining? Well I enjoyed this as I could hide my face on my bf's shoulder (which I enjoyed a lot

). But is it worth watching? Not really. It's kinda pointless if you ask me. I haven't watch the original one so can't say whether it's slightly better or not.