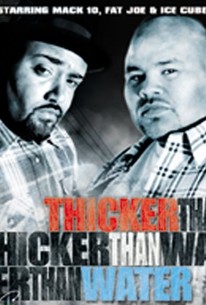 This dramatically-charged film tells the story of rival "top dogs" from two inner-city gangs who cooperate amidst a turf war to promote their music. When DJ's (Mack 10) mixing equipment sets on fire and a record company executive double-crosses Lonzo (Fat Joe), the two decide to take the future into their own hands. DJ and Lonzo turn to Gator (CJ Mac), a successful drug-lord who has left the streets and is living high in the hills of Los Angeles. For a time, their association is a success, but when someone rats to the police, the trouble begins. Meanwhile, DJ is juggling two girlfriends, Brandy (Kidada Jones) and Leyla (Tom'ya Bowden) and his mother keeps urging him to go to the hospital to visit the father who abandoned him as a child. Back on the street, when a fellow gang member is killed one night, the careful allegiance that has developed between DJ and Lonzo wears thin. It takes a remarkable twist of fate to bring them back together.

Critic Reviews for Thicker Than Water

There are no critic reviews yet for Thicker Than Water. Keep checking Rotten Tomatoes for updates!

Audience Reviews for Thicker Than Water

meh.. by far not the best hip hop film. no one in this movie can really act. but its one of those movies you don't really care much about. its not bad and is good enough to sit through.