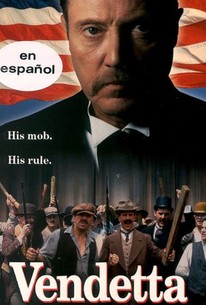 Based on a true story, Vendetta tells the shocking and tragic story of a group of Sicilian immigrants working on the New Orleans docks in the 1890's. After the Chief of Police was brutally murdered, much of the city's Sicilian population was rounded up and brought in for questioning. Eventually, thirteen were formally tried for murder and nine went to trial, and while they were acquitted, a series of brutal lynchings showed they had as much to fear from the city's general populace as they did from the corrupt police force. The cast includes Christopher Walken and Bruce Davison (who previously starred in a very different look at New Orleans' past, French Quarter).

There are no critic reviews yet for Vendetta. Keep checking Rotten Tomatoes for updates!

Was on demand, vatti and I clicked it and were surprised as to what kind of movie it actually turned out to be. Filmed as if it's an older flick, with an interesting cast of characters (known and unknown) no less. This film completely highlights a dark part of history that many do not know about (till now anyways). Well told although the story itself is shameful to say the least. Review TBC.