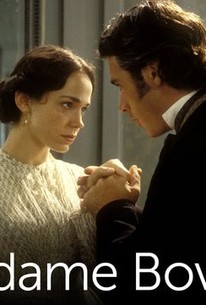 Previously filmed by such cinematic geniuses as Jean Renoir and Vincente Minnelli, Gustave Flaubert's once-scandalous 1857 novel Madame Bovary was transformed into a two-part British miniseries in 2000. Set in the rural Normandy of the 1830s and 1840s, this is the story of Emma Rouault (Frances O'Connor), the pampered, well-educated daughter of a wealthy gentleman. Much to her own surprise, Emma accepts the marriage proposal of Charles Bovary (Hugh Bonneville), the provincial doctor who ministers to M. Rouault during a moment of medical crisis. Once she has become Madame Bovary, Emma quickly grows bored with her bourgeois existence, retreating into erotic fantasies stoked by her addiction to romantic novels. Inevitably, Emma strays from her marital vows, first with a handsome young clerk named Leon (Hugh Dancy), then with dashing country squire Rodolphe (Greg Wise). In order to sustain the lavish lifestyle which she feels is her basic right, Emma squanders all of her husband's money -- which plays right into the hands of usurious draper Lheureux (Keith Barron), who has his own wicked plans for the foolishly extravagant Mme. Bovary. In the United States, Madame Bovary was telecast on February 6 and 13, 2000, as part of the PBS Masterpiece Theatre anthology.

It is a pretty production, though sunk at first in buried-alive shadows.

There are no featured reviews for Madame Bovary at this time.