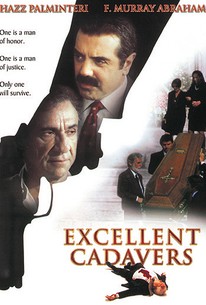 A lawman and a reformed criminal join forces to see justice done, even at the expense of their lives, in this crime drama based on a true story. Chazz Palminteri plays Giovanni Falcone, a Sicilian magistrate who is determined to break the back of organized crime, which has held sway over his community for too long. With the help of Tommaso Buscetta (F. Murray Abraham), a former Mafia leader who has joined forces with the police, Falcone is able to prosecute hundreds of organized crime figures in the late '80s and early '90s, but his crusade is met with deadly reprisals from the mob.

But in spite of all that--and in spite of the artfully lit interviews and energetic musical score--the documentary resolves into an accumulation of names, dates, and mundane procedural detail.

Though not a feelgood flick by any means, this encyclopedic recounting/bittersweet biopic does pay tribute to two dudes crazy enough not only to take on the mob, but to win for a while.

...if you ever wondered what might happen if you literally stapled your mouth shut, this is definitely the flick for you.

Dull and pedantic, especially for an HBO production.

There are no featured audience reviews yet. Click the link below to see what others say about Excellent Cadavers!