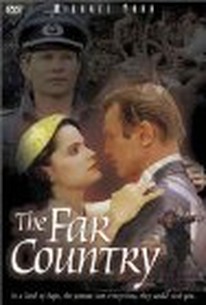 Two people trying to leave ugly memories behind them find life and love anew in Australia in this made-for-television adaptation of the novel by Nevil Shute. Carl Zlinter (Michael York) was a doctor who was drafted into the German Army during World War II and forced to serve the Axis war effort. After the fall of the Third Reich, Carl becomes a displaced person and in time emigrated to Australia, where he tries to build a new life for himself and forget his horrific past. Jennifer Morton (Sigrid Thornton), meanwhile, is a woman from Great Britain who has her own grim memories of the toll the war took upon her nation, and has decided to visit Australia in search of sunshine and fresh scenery. Carl and Jennifer meet, and they soon fall in love, but it becomes obvious that they must reconcile their very different pasts if they are to make a future together. Originally produced for Australian television, The Far Country first aired as a two-part miniseries. ~ Mark Deming, Rovi

Robert Morgan
as Clerk of Courts

Fred Steele
as US Major

Critic Reviews for The Far Country

There are no critic reviews yet for The Far Country. Keep checking Rotten Tomatoes for updates!

There are no featured reviews for The Far Country at this time.