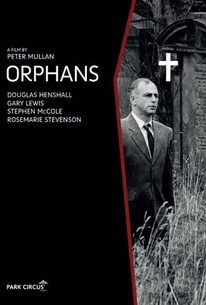 Four grown up children come together the night before the funeral of their mother in Glasgow. While Thomas sings a tribute in the local pub, a fight breaks out and Michael is stabbed. John wants to avenge his brother, while Thomas goes to chapel with his sister Sheila for an all-night vigil. Even here, though, is not safe, as a storm tears the roof from the church. After an emotional and traumatic night, the siblings eventually reunite in grief.

Judith A. Williams
as Amanda

Vanya Eadie
as Maria
View All

My guess is that Mullan never decided what tone his film should aim for; he fell in love with individual sequences without asking how they fit together.

Writer-director Peter Mullan never seems clued in as to how hilariously atrocious Orphans is.

Arguably one of the funnier and more heartfelt of the [crime movie] genre to come along of late.

Worthwhile, even if the getting there isn't always easy.

There are no featured audience reviews yet. Click the link below to see what others say about Orphans!