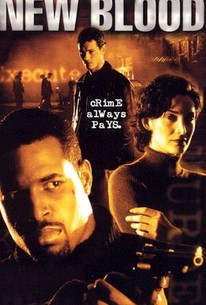 Family ties and violent crime make strange bedfellows in the thriller New Blood. Alan White (John Hurt) is a British businessman who is the father of a pair of twins. Alan's son Danny (Nick Moran) has fallen into a life of crime, while his daughter is in the hospital, in desperate need of a heart transplant. One day, Danny appears at Alan's doorstep, bleeding severely, with an unusual proposition. Danny will volunteer his heart for his sister's transplant if Alan will participate in a very dangerous con. Danny and his friends are working for a crime boss named Mr. Ryan (Eugene Robert Glazer), who has arranged the kidnapping of Williams (Rob Freeman), a wealthy but reclusive man. Danny and his boys are not told that Williams is under armed guard, and the attempted kidnapping is a disaster, with Williams accidentally killed. Danny is seriously injured and does not expect to survive, but rather than risk the wrath Ryan would inflict on his friends, Danny asks Alan to take Williams' place -- Ryan doesn't know what the man looks like, so while the scam is very dangerous, it could be pulled off. New Blood is the feature debut from writer-director Michael Hurst.

Layton Morrison
as Guard
View All

Hurst earns points for effort, but his film ultimately falls short of a passing grade.

There are no featured reviews for New Blood at this time.