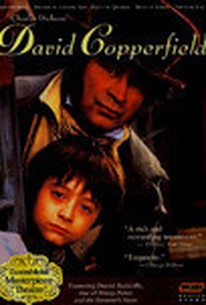 A distinguished cast highlights this made-for-TV adaptation of one of Charles Dickens' best-loved novels. Young David Copperfield (Daniel Radcliffe) is loved by his mother Clara (Emilia Fox), but does not get along with his foul-tempered stepfather, Murdstone (Trevor Eve). After biting Murdstone during a fight, David is forced to attend a boarding school operated by the vicious and humorless Mr. Creakle (Ian McKellen). After Clara suddenly dies, David is sent to work; while his labors are tiring and poorly compensated, he finds a benefactor in the good-hearted Mr. Micawber (Bob Hoskins) and his wife (Imelda Staunton). However, Micawber does not manage money well, and winds up in a debtors prison. Left to his devices, David sets out to find one of his few surviving relatives, his eccentric Aunt Betsy (Maggie Smith). The years pass, and the grown-up David (Ciaran McMenamin) has struggled to build a better life for himself, with the help of Betsy's attorney, Mr. Wickfield. David also becomes friendly with Wickfield's daughter Agnes (Amanda Ryan), but he finds a nemesis in the lawyer's clerk Uriah Heep (Nicholas Lyndhurst). David also marries a simple woman named Dora (Joanna Page), but their union brings him little happiness. David Copperfield was a co-production of the BBC and WGBH Boston. It received its American premier on the acclaimed anthology series Masterpiece Theatre. ~ Mark Deming, Rovi

Joanna Page
as Dora
View All

There are no critic reviews yet for David Copperfield. Keep checking Rotten Tomatoes for updates!

Near perfect adaptation, a more vigorous adult Copperfield is all this would have needed to make it stronger.

An okay adaptation of the Dickens classic.

Its okay....but its been done to death. The book will always be better....I should be sho for that but still...