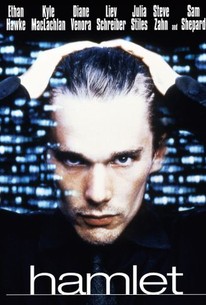 William Shakespeare's classic tale is brought to the screen for the third time in ten years in this modernized interpretation. Writer/director Michael Almereyda updates the story to the present day, where Hamlet (Ethan Hawke) is a struggling filmmaker whose personal and familial trials are set against the machinations of a huge production firm called the Denmark Corporation. Joining Hamlet as he seeks revenge for the death of his father and the wedding of his mother to an enemy are Kyle MacLachlan as Claudius, Julia Stiles as Ophelia, Bill Murray as Polonius, Sam Shepard as the ghost of Hamlet's father, Diane Venora as Gertrude, Steve Zahn as Rosencrantz, and Dechen Thurman as Guildenstern.

Almereyda's details actually give the core story an additional layer of power. The cyclical decay of Hamlet still resonates, even as its '90s flourishes have become increasingly irrelevant.

Too often, the gimmick of modern-dress Shakespeare is undone by the sheer visual incongruity of people in business suits speaking in 17th-century vernacular. Hawke (and those surrounding him) somehow make it play.

2000 version of Hamlet is just dreadful.

I like the way the material has truly been "adapted" to its modern setting without the language being adulterated.

It could prove almost as definitive -- and far more easily digestible -- than Branagh's textually complete version.

The films pops off the screen in brilliant color and striking arrangements of actors.

This melancholy Dane is son of the deceased Chairman of Denmark Corporation. His castle is a sleek but alienating New York high rise dotted with omnipresent surveillance cameras, his kingdom city streets lined with paparazzi and tabloid reporters.

Almereyda pares the drama down to its bloody core, leaving a potent tale of despair, madness and loss.

The movie is almost playful in its mission to burrow around inside Hamlet and discover what's still relevant about it.

The city becomes a living emblem of the tense coexistence of art and corporatism, an uneasy relationship which Almereyda emphasizes as the core conflict of his picture.

[This is] an imaginative and exciting update, lacking only the decent swordfight the ending demands.

A brilliant and astonishing modern adaptation of this classic tale or revenge and tragedy. A dazzling and remarkable masterwork that shines with style and passion. It has such an amazing all-star cast. Ethan Hawke is is truly superb, he gives one of his finest and most absorbing performances. An unforgettable movie that you cant take your eyes off of. It sizzles with energy and fierce dedication to the material.

Good modernisation, but not as spectacular as Baz Lurmans Romeo and Juliet update. Also, for Hamlet, is not one of the best versions.

An all star cast performs and modern day New York is the setting for yet another take on the Bard's most well known play, with less emphasis on delivery of the lines (the iambic problem) than on the emotional intent implied by the words. Not for everyone, but then neither is iambic pentameter. The casting choices are inspired.

This is not bad at all. Again, it's no Branagh, but I enjoyed it. I"m not sure if BIll Murray -- who is on my favorite actor list -- is delivering intentionally his Polonius lines the way he does, in that halting manner, as if not fully comprehending the words, or if he really is not doing a very good job. Even with that, this is well worth seeing.