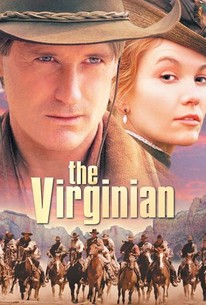 Actor Bill Pullman made his directorial debut with this third screen adaptation of the classic Western novel by Owen Wister. The Virginian (Pullman) leaves the state of his birth to make a new life for himself on the frontier of the American West. He falls in love with Molly Stark (Diane Lane), a schoolteacher also new to Wyoming, and becomes the foreman of a successful cattle ranch, hoping to make good in her eyes. But he is forced to resort to violence when he must protect the ranch against the treacheries of a rival rancher and the betrayal of a former friend; Molly's stern opposition to eye-for-an-eye justice demands that he choose between his conscience and the woman he loves. The Virginian, which received its world premiere on the TNT cable network, co-stars John Savage, Dennis Weaver, and Colm Feore; James Drury, who played the title role in the 1960s TV series based on The Virginian, appears as Rider.

Bill Pullman
as The Virginian

Critic Reviews for The Virginian

There are no critic reviews yet for The Virginian. Keep checking Rotten Tomatoes for updates!

There are no featured reviews for The Virginian at this time.