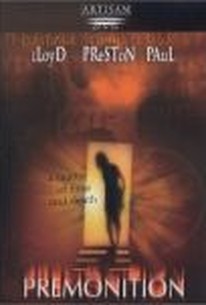 A brush with death causes a woman to see into the world in a different way in this psychological thriller from Canada. A young woman writing for a tabloid (Cynthia Preston) is working with a veteran reporter (Christopher Lloyd) on a story about a patient at a mental hospital who claims to be able to predict people's deaths. The woman finds herself flashing back to a plane crash in which she was nearly killed and recalling a series of unusual events that occurred in its wake. Soon she begins to wonder if these things may be linked in some way. ~ Mark Deming, Rovi

Any suspense director Gavin Wilding is able to build is all for naught.

There are no featured audience reviews yet. Click the link below to see what others say about Convergence (Premonition)!