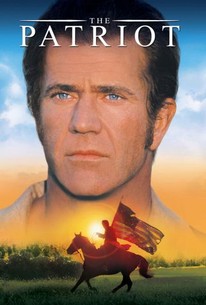 Critics Consensus: The Patriot can be entertaining to watch, but it relies too much on formula and melodrama.

Critics Consensus: The Patriot can be entertaining to watch, but it relies too much on formula and melodrama.

Critic Consensus: The Patriot can be entertaining to watch, but it relies too much on formula and melodrama.

Roland Emmerich and Dean Devlin, the director/producer team responsible for such sci-fi blockbusters as Independence Day, Stargate, and Godzilla, take a step back in time with this drama set during the American Revolution. Farmer Benjamin Martin (Mel Gibson) was born and raised in South Carolina, and fought bravely during the French-Indian wars. But since the death of his wife, Benjamin has renounced violence and quietly tends his crops, raising his seven children alone. In 1776, over Benjamin's objections, his oldest son Gabriel (Heath Ledger) joins the fight against the British. Gabriel returns from battle seriously wounded, with Lord General Cornwallis (Tom Wilkinson) calling for his arrest. A skirmish breaks out on Benjamin's plantation, and one of his children is killed as Gabriel is captured by Col. Tavington (Jason Isaacs) and sentenced to hang. Benjamin sets aside his vow of pacifism and rescues Gabriel; with the help of his former comrade-in-arms Harry Burwell (Chris Cooper), the father and son form a regiment of Carolina patriots whose cunning and ruthlessness make them heroes among the colonists -- and wanted men by British troops. Loosely adapted from the true story of Francis Marion and filmed on location in South Carolina, The Patriot was the first feature film made with the cooperation of the Smithsonian Institute, who advised the producers on historical accuracy. Joely Richardson also stars as Charlotte, Benjamin's sister-in-law who helps him care for the children. ~ Mark Deming, Rovi

Dara Coleman
as Redcoat Sergeant No. 2

Derrick B. Young
as Slave Boy

News & Interviews for The Patriot

Now Streaming: Pirates of the Caribbean, How to Survive a Plague, And More
12 Facts About 2012
Critical Consensus: "Jackass" Kicks; "King" Is Dethroned; "Fearless" Is Action-Packed; "Flyboys" Is Grounded

View All The Patriot News

Critic Reviews for The Patriot

Many graphic battle scenes, not for all teens.

The main irony, of course, lies in the film's title, which suggests that the absurdly flag-waving activist should be taken at face value despite the ample evidence that defending his country is the last thing on his mind.

Emmerich's battle scenes may look authentic to anyone who has ever stared hard at a history book, but in every other way the film is long, empty and bogus.

Its convictions may be half-baked, but it has the courage of them.

Make no mistake about it: The Patriot is a cartoon, even if it does have real people playing the parts.

A grand yarn with a sense of the weight of history and an awareness that the winners are often those who have lost the most.

The Patriot is heavily concerned in re-writing and re-conceptualising America's bloody, revolutionary history.

Have a peep at "The Patriot" and ponder people's present-day pittance of honor and propriety.

To use the language of the movie's time, "The Patriot "deserves a whole-hearted, full-throated roar of "Huzzah!"

No fond chuckles, please -- it's abominable. And to take any pleasure in it would be to resemble those followers of pro-wrestling who know it's all fake but still cough-up top-dollar to get ring-side and holler.

While his hero is conscience-stricken about killing, Emmerich sure enjoys serving it up in generous helpings.

Audience Reviews for The Patriot

Flawed, but works alright if you've nothing better to do.

I'm ashamed to admit that I really, really like this film considering who the director is. So let me say that the film drags in lots of places. And the acting, while good, is not excellent. I encourage rental as opposed to purchase.

Colonel William Tavington: Let it be known if you harbor the enemy you will lose your home.  "Some things are worth fighting for." I have seen The Patriot countless times by now, and yet I still love it. While a lot of epics seem distant and cold, this one has an amazing amount of heart involved. That isn't to say that it isn't the violent war film it is notable for. There's an extreme amount of blood, but in between the battles, there's also an extreme amount of feeling. The film is long, but not a second is wasted. There's always something going on. If there isn't a battle going on, there's character development or plot development. This film is as much about family as it is about the Revolutionary War. There's a humungous cast of good actors, some big names(Mel Gibson, Heath Ledger, Tom Wilkinson) and a variety of other character actors(Joely Richardson, Donald Logue). Besides being just another war movie, this has a lot more going on. It's at times beautiful, at times brutal, at times sad, at times humorous, and at times exciting.  The Patriot centers the Revolutionary War around a man named Benjamin Martin and his involvement in the war. At first he doesn't want South Carolina to go to war along with some of the other colonies because he knows innocent people will die. When the war happens in his front yard and one of his sons is murdered by Tavington(a truly good villain), he joins up. The Continental Army is vastly undermanned, which brings up the usage of guerilla warfare, which Martin and his militia use to great effectiveness. His men aren't real soldiers, but "farmers." They are just ordinary men who join up to fight off the Redcoats. The most notable thing about the film is obviously the battle scenes. They are violent and pretty realistic. The battle scenes are filmed beautifully, for lack of a better word. This is easily Ronald Emmerich's best film. He's done some other stuff that is fun, but not what you'd call great filmmaking(Independence Day, The Day After Tomorrow, 2012), but this is grand, epic filmmaking. I know there's a lot of people out there that don't believe this film to be great, but I certainly don't agree with them. As far as war epics go, this is about as big and good as they can come. I'm not saying it is the best war movie ever, but it deserves more respect then it has gotten. It's an emotionally powerful movie in my opinion. Sure it shows a fictionalized story on how America came to be through the Revolutionary War, but the family themes of the movie is what shine through more then anything else. There's a lot of big themes going on here too: freedom, love, honor, respect, revenge, and perseverance; but in the end, family is the biggest theme. The Patriot just misses being a complete masterpiece, but as it is, it's still an amazing achievement and a great film.