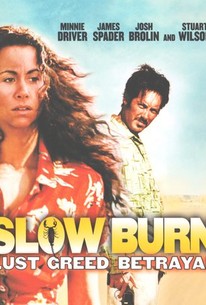 Greed and obsession fuel a deadly showdown in this thriller. When Trina (Minnie Driver) was a girl, her mother and father were determined to find a fortune in diamonds that had supposedly been buried in the desert in Mexico many years before. Now that her parents have passed on, Trina has inherited their obsession, and continues to search for the stones against the advice of Frank (Stuart Wilson), a geologist and longtime friend of the family. But Trina is not about to give up, and when she discovers that a pair of escaped convicts (James Spader and Josh Brolin) have happened upon the diamonds, she is grimly determined to steal the jewels from the fugitives. Incidentally, Slow Burn features characters named Frank Norris and Paulina McTeague, apparent references to Erich Von Stroheim's Greed, which also deals with thieves trying to outwit each other in the desert, and was based on the novel McTeague by Frank Norris.

The title gives an adequate description of what this thriller does to your time.

There are no featured audience reviews yet. Click the link below to see what others say about Slow Burn!