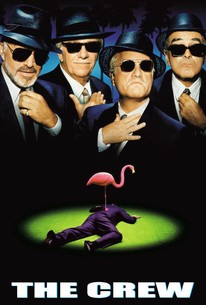 Critics Consensus: Though the four actors are good together, the jokes are stale and not funny.

Critics Consensus: Though the four actors are good together, the jokes are stale and not funny.

Critic Consensus: Though the four actors are good together, the jokes are stale and not funny.

In this dark comedy, a group of retirees wants to save their homes -- but they're not typical senior citizens trying to make the most of their Social Security checks. Four aging former mobsters -- Joey "Bats" Pistella (Burt Reynolds), Bobby Bartellemeo (Richard Dreyfuss), Mike the Brick (Dan Hedaya), and Tony "The Mouth" Donato (Seymour Cassel) -- live in the same rundown Miami apartment complex, the Raj Mahal. New owners hope to clear out the current tenants and replace them with a younger, more lucrative clientele. But the veteran gangsters don't want to move, so to scrape up the extra rent money, they take a job executing the father of a Miami mob boss. They happen to know he's already dead, so all they have to do is make it look like they did the hit. Their problems start when loudmouthed ladies' man Tony tells too much to Ferris (Jennifer Tilly), a stripper, and soon she's talked him into murdering her mother (Lainie Kazan) in exchange for her silence. The Crew also features Carrie-Anne Moss as a detective and Jeremy Piven as a mob kingpin out to avenge his father's death.

Vince Cecere
as Wiseguy No. 1

Penelope Alexitch
as Girl No. 1

Christy Tummond
as Girl No. 2

Gino Salvano
as Raul Guy No. 2

Allan F. Nicholls
as Wiseguy No. 3

George Fisher
as Tony the Torch

Harry Boykoff
as Louie the Lip
View All

Critic Reviews for The Crew

Most of the jokes work well but too many of them have the ritual, predictable feel of sitcom humor.

The movie is so mild, so benign, its humiliation-to-vindication arc so predictable and its old-folks jokes so feeble that you want them to start shooting the remake immediately.

Some movies (The Tao of Steve, say) are like Pepto for your summer blockbuster heartburn. This one is like a half-pound Macho Loco burrito. With fire salsa and extra onions.

For all its violent gestures, this one screams safety, safety, safety, never taking anything like a real chance, never going anywhere unruly or unpredictable in its dogged allegiance to blandness.

Stuck in a dry old tributary without a paddle.

The movie always seems to be out of sync with itself.

My first reaction to The Crew was: 'Thank goodness it was only 88 minutes.'

Once the story clicks into gear, The Crew is a lot of fun. But that doesn't happen until after the midpoint.

... the worst of American popular culture; it is a lazy, condescending, formulaic film that the filmmakers didn't even bother to finish

Yeah, nothing funnier than old men farting and Viagra jokes.

Audience Reviews for The Crew