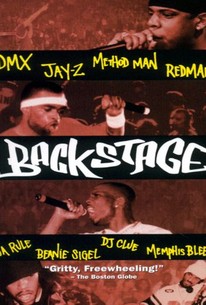 In 1998, rapper Jay-Z's third album, Vol. 2: Hard Knock Life made him one of hip-hop's biggest crossover acts, with the single "Hard Knock Life" becoming a major hit on radio and the sales charts. In 1999, Jay-Z, who also runs the hip-hop oriented Rock-A-Fella Records label, launched a major concert tour, in which he joined forces with fellow rappers Method Man, DMX, and Redman for a road trip that packed halls at 54 shows in two months, earning $18 million at the turnstiles. This documentary takes a close look at the music Jay-Z and his friends created onstage, as well as their adventures -- both positive and negative -- as they take one of rap's biggest shows on the road. Hard Knock Life Tour also features new music from The Lox, Memphis Bleek, and T-Boz from the R&B group TLC. Incidentally, if the title sounds a bit familiar to non-rap fans, it may be because it was sampled from a song featured in the musical Annie.

An astonishing number of shots are less than two seconds long

Never comes alive with anything authentic.

Compelling French drama about the nature of obsessive fan-dom, with strong central performances by both Isild LeBesco and Emmanuelle Seigner.

There are no featured audience reviews yet. Click the link below to see what others say about Backstage!