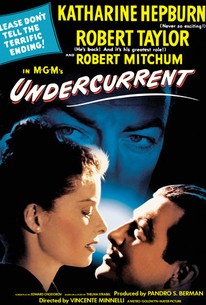 A change of pace for both director Vincente Minnelli and star Katharine Hepburn, this taut drama features the latter as Ann Hamilton, the daughter of a scientist (Edmund Gwenn), who after a whirlwind romance marries handsome but slightly mysterious inventor turned businessman Alan Garroway (Robert Taylor). But wedded bliss proves short-lived when Garroway refuses to discuss his brother Michael, whose presence is felt constantly despite the mystery surrounding his whereabouts. The missing Michael becomes an obsession for Ann, whose curiosity is piqued even more after a chance encounter with Sylvia Burton (Jayne Meadows), a young woman who figures in the lives of both brothers and who displays a strange resemblance to Ann herself. Despite Alan's dire misgivings, Ann feels compelled to solve the mystery of Michael, until, that is, she discovers that Alan may very well have murdered his own brother. Undercurrent marked the screen debut of Jayne Meadows and a breakthrough of sorts for Robert Mitchum, whom M-G-M borrowed from David O. Selznick for a reputed $25,000. ~ Hans J. Wollstein, Rovi

Bill Cartledge
as Messenger
View All

Minnelli's first foray into film noir is marred by the casting of Katharine Hepburn as a frail woman, married to a psychopath (Robert Taylor, also miscast) but attracted to his sensitive brother (Robert Mitchum!)

Crime thriller with many strange undercurrents itself.

It successfully takes on the theme from Gaslight.

Upon it's release in 2000, Jonathan Mostow's "U571" was panned by many for it's rewriting of World War 2 history. In Mostow's version of events the crew of an American submarine are responsible for breaking the Nazi enigma code. In reality it had been cracked by a team of British and American scientists. Hollywood's WWII revisionism began a lot earlier though. In this 1946 movie Taylor's inventor is credited with inventing a machine which won the war. It's hard to buy Taylor as a scientist, he was one of those actors whose fame seemed to be solely based around the fact he looked good in a suit. If he was any more wooden the crew would have to sweep up sawdust after each take. Pairing him with an actress so full of life as Hepburn does him no favors. You would never guess she was five years older than Taylor, a casting choice which is rare even in today's supposedly more liberated Hollywood. The movie feels somewhat like a changing of the guard, stiff actors like Taylor were dying out, being replaced by a new breed of more naturalistic performers like his costars Hepburn and Mitchum. By Minnelli's standards this is average fare, a ripoff of Hitchcock's "Suspicion" but sadly lacking a leading man of Cary Grant's charisma. Thankfully Hepburn gets the lion's share of screen time as scenes which don't feature her fall flat. Minnelli does his best to keep things interesting and in lesser hands it would be a rather plodding affair. His love of music plays a part in the form of a recurring Brahms melody which ultimately bonds Hepburn and Mitchum together. Minnelli is of course known most of all for his lavish use of color but he equally knows how to get the most from black and white. Here he works with the great cinematographer Karl Freund to produce some striking monochrome images. A scene involving a knocked over lamp is particularly impressive, creating a shadow and light dynamic which serves to heighten the scene. It pales in comparison to similar melodramatic thrillers like "Suspicion" and "Leave Her To Heaven" but fans of the sub genre will find it worthwhile.

hepburn is oddly cast in a menaced woman role but that helps make it interesting viewing.