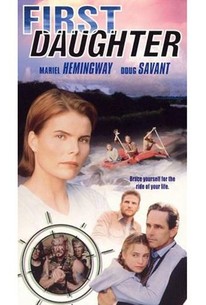 A federal agent is demoted to a less challenging assignment, only to have it become the most dangerous mission of her life in this action-thriller. Alex McGregor (Mariel Hemingway) is a Secret Service agent who once guarded the President of the United States, Jonathan Hayes (Gregory Harrison). But after a series of misunderstandings following an attempt on the President's life, McGregor has been reassigned to oversee security for Hayes' teenaged daughter, Jess (Monica Keena). Jess has been chafing under the pressures of having a team of agents following her everywhere, so when she makes plans to go on a white-water rafting trip, the President requests a minimal compliment of Secret Service agents. This proves to be a mistake when Jess and her companions are kidnapped by a gang of right-wing terrorists. McGregor is forced to join forces with scruffy wilderness guide Grant Carlson (Doug Savant) in order to find Jess and return her to safety. Though set in the United States, First Daughter was shot in Australia, and had its premier on American television.

Van Markell
as Agent
View All

There are no critic reviews yet for First Daughter. Keep checking Rotten Tomatoes for updates!

There are no featured audience reviews yet. Click the link below to see what others say about First Daughter!