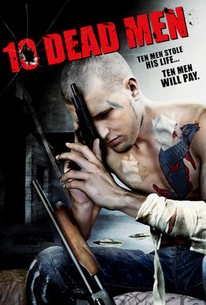 A man with a brutal past is called on to repay an old blood debt, in the process crossing the city's most powerful crime boss and realizing that his only hope for survival is to wipe out the entire syndicate before they realize what's hit them. There was a time when Ryan (Brendan Carr) truly believed that he'd finally outrun his dark past; that all changed the moment a familiar face showed up on his doorstep begging for help. But Ryan has been betrayed, and everything he cared about the one person he cared most about has been forced to endure inhuman suffering. Ten men were responsible for destroying Ryan's life, and now ten men will die by his hand. It may be a suicide mission, but that's a risk that Ryan is willing to take in order to give his tormentors a taste of their own vicious medicine. ~ Jason Buchanan, Rovi

Doug Bradley
as The Storyteller

Keith Eyles
as The Projects Manager

There are no critic reviews yet for 10 Dead Men (Ten Dead Men). Keep checking Rotten Tomatoes for updates!

There are no featured audience reviews yet. Click the link below to see what others say about 10 Dead Men (Ten Dead Men)!