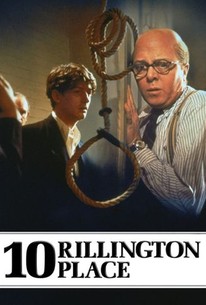 This film chronicles the true story of British mass murderer John Reginald Christie. Throughout the late 1940s, Christie lured middle-aged women to his London flat, then killed and buried them. Timothy John Evans was wrongly accused of one of Christie's murders and executed. Several years later, the truth came out.

Basil Dignam
as Medical Board

Norman Henry
as Medical Board

Edward Burnham
as Medical Board

Norma Shebbeare
as Woman In Cafe

Fred Hugh
as Man in Pub

Arthur Gross
as Man in Pub

Howard Lang
as Man in Pub

More highly regarded these days than when it was released in 1971, Richard Fleischer's 10 Rillington Place is a grimly efficient treatment of a once-notorious case.

...it can't reconcile its exposé on the British justice system which dominates the last third of the film and its lurid reenactments of Christie's crimes.

The banality of evil takes on a slightly different chill in this effectively low-key drama about a banal nebbish committing unspeakably evil acts.

Kennedy's book was fiercely confrontational and the film reflects this. This is a world where everybody is kicking downwards.

an unsettling reminder that, more often than not, it is not overly clever traps but rather people who kill people.

Deeply disturbing and probably the worst date movie ever made.

10 Rillington Place is a true crime drama and while truth may be stranger than fiction it also can be harder to make interesting.

Not the fastest moving of films, but based on a true story, it's an intriguing watch. Attenborough was very good in this sinister role and for the time of it's release, it managed to show enough of the story to give a gruelling account of the case.

Immediately one of the greatest films I have ever seen. I feel so privileged that I was able to see this film on the big screen. It starts with the wonderful Richard Attenborough being a sick little puppy. Set during the war, in a policeman's unifrom, offering medical help to a young woman. Attenborough is everything that someone should trust. A calm English man that offers you tea. Next, he's murdering the woman with gas, and not a hint of remorse. The film jumps forward 5 years, and introduces a tragic couple. They are about to have a baby, but cannot afford one. This sparks Attenborough's killing side, and he offers to perform an abortion. The film becomes a tense and depressing thriller that outlines the problems with capital punishment. It's sad as it's a battle of wits, but one of the protagonists has no wits to battle with. Attenborough is one of the most chilling and disturbing villains I've ever seen. The claustrophobic setting, the invasion of someones life, and the heartless deception, are just some of the great things about this movie. As it finished on a freeze frame we hear heavy breathing, next the credits scroll silently. Everyone in the cinema stood up in silence as though they had just been punched and winded. This film had more dread and a bigger impact than any I can recall.

Excellent fact-based crime drama that avoids sensationalism for a more subtle approach, but retains the psychological darkness you'd expect from a serial killer movie. This movie proves life is stranger than fiction, and nothing beats a well made movie of a true horrendous crime. As a side note: I have read that these events helped abolish the death sentence in England. I can believe it, cuz a story likes this really makes you ponder this issue.

Underrated, shocking, and BRILLANT! 10 Rillington Place is truly haunting. One of my favorite true crime biographies. The True Story of John Christie (8 April 1899 - 15 July 1953 sentenced to death: hanged) - "John Reginald Halliday Christie was a typical "repressed" lust killer who could achieve satisfaction only through rape, murder, and probably necrophilia. Over a period of thirteen years Christie killed eight women, including his own wife, without causing the slightest suspicion. His respectable and quiet manner was in no way like it seemed."

Actor Richard Attenborough (director of Gandhi) plays John Christie (complete opposite of Gandhi) the psychopathic, sexually depraved English serial killer with a "very superior intelligence". It's hands down one of the creepiest performances in portrayal of a real life serial killer that I've ever seen. He's so convincingly evil that you'd think he might actually be related to John Christie - or at least took some acting lessons from him. Of course I never met John Christie before, but Attenborough's performances sure makes me feel like I've seen him in action. Pretty sick sh*t! All the reading I did on John Christie, and after watching this movie, all I can really say is this......Richard Attenborough might be a serial killer. Or maybe he's the boogeyman? ( I sincerely mean that as a compliment) I just wouldn't want to get John Christie's, I mean Richard Attenborough's autograph. He plays creepy way too creepy. 10 Rillington Place is extremely disturbing (without) being violent, bloody, or sexually explicit, and delivers a great deal of accuracy on the Christie case. The movie was even filmed in the actual home where the notorious murders occurred. Just the images alone from the real place gives me goosebumps. Makes you feel like you're kind of there in a strange way. Almost like being in a real haunted house - a house of horrors. It's definitely not the most comfortable experience. The truth is most scary sometimes, especially in a horrifying case like this. But sometimes being scared can be a lot of fun! 10 Rillington Place might just do the trick.