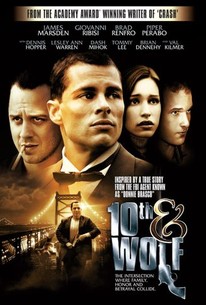 Critics Consensus: A scattered mob movie that employs every mafia cliche and fails to establish an identity of its own.

Critics Consensus: A scattered mob movie that employs every mafia cliche and fails to establish an identity of its own.

Critic Consensus: A scattered mob movie that employs every mafia cliche and fails to establish an identity of its own.

A man is forced to go against his family and his principles in the name of serving his country in this drama inspired by actual events. Tommy Santoro (James Marsden) was just a boy when his father was murdered, and young Tommy quickly discovered his dad was a high-ranking member of the Philadelphia Mafia. Tommy grew up determined to stay on the right side of the law, but his brother Vincent (Brad Renfro) and cousin Joey (Giovanni Ribisi) had other ideas and ended up joining "the family business." Tommy enlisted in the Army and served in Operation Desert Storm, but when he impulsively stole a jeep, he was arrested by the military police. However, Tommy finds he's not questioned by MP's, but by Horvath (Brian Dennehy), an FBI agent who knows all about his past and family history. Horvath has learned that Sicilian mobsters have been taking over the Philly rackets, and persuades Tommy to join up with Vincent and Joey in order to infiltrate the Mafia and serve as an informant to the FBI. Tommy grudgingly agrees, but he's uneasy about betraying his family and following the path that killed his father -- especially when he discovers his actions have put Vincent and Joey in grave danger. Also starring Dennis Hopper, Piper Perabo, and Lesley Ann Warren, 10th & Wolf was the directorial debut for Bobby Moresco, who won an Academy Award for his screenplay for Crash.

Johnny Ligato
as Sicilian No. 1

Rose Rossi
as Blonde at Diner

Larry Demme
as Man in Tuxedo

Daniel M. Wholey
as Himself
View All

A hellish and unconvincing celebration of badda-bing-ness.

A mix of the first half of Donnie Brasco, the last 20 minutes of A History of Violence and a couple of episodes of I Love the'90s.

The movie doesn't miss a cliché, ineptly lifting liberally from The Godfather and GoodFellas, among other classics.

At this late date, filmmakers who draw inspiration from the Mafia had better have a whole new angle to offer. Otherwise, they'll end up with a movie like 10th & Wolf.

A respectable addition to the packed pantheon of watchable but all too familiar Mafia-themed movies.

Coming from a guy who just won an Oscar for screenwriting? One has the right to expect something a little less rote, redundant, and oppressively familiar as 10th & Wolf.

A rather conventional plot is invigorated by intense lead performances from Marsden, Renfro and Ribisi, whose Joey is continually ready to explode in fierce anger, as well as a very good supporting cast, particularly Dennehy and Lesley Anne Warren.

Handsome, well-made film that is simply too familiar.

This works both as an action film and Greek tragedy.

A 4 Star Film, About as good as they get when it comes to Crime Family Movies. A Solder is facing prison or go back home and collect information for the FBI by setting up a Mob Boss. Is packed with action and thrills and drama. A full cast. I didn't recognize Val Kilmer a change in parts for him. Dennis Hooper played good boss. But Giovanni Ribisi stole the show. If you have passed this one up before or your a little skeptic because its not a 2009 Movie, don?t be. Its well worth it. A good addition to any collection. 4 Stars

This movie is exactly why Giovanni Ribisi is one of my favorite actors. He was brilliant in this movie. But he is in every movie he does. But this movie blew me away. One of the best Mob movies I have ever seen. The cast was so good. The acting was right on the money as they say. Brad Renfro, (R.I.P) did an amazing job at playing Vincent. James Marden, was so good. I have only seen him in a couple movies and by far this movie was the best role I have seen him portray. The story was intense. It grabs you from start to finish. Just AMAZING.. I usually don't care for these types of movies, but knowing Giovanni, was in it I thought I would watch it just for that fact alone. So glad I did. I would have missed out on a really great movie. I recommend this to everyone. Even if this isn't your kind of movie, I think you will enjoy it.

This was an undeniably smooth and richly detailed mobster crime saga. You will not only enjoy it you will be absorbed by the young and agile characters, (as well as the older veteran ones) as they tell their stories. A haunting believable tale that will always be remembered. In the same caliber of performance of "Blue Hill Avenue" See this....get it...I want this for my collection!!!!!!!!

The best gangster film in recent year's. It's Goodfellas meets Donnie Brasco. A stylish, complex, hard-hitting and electrifying movie. A pure knockout. Director, Bobby Moresco has crafted an insightful, powerful, tense, terifficly told and unforgettable crime drama. The cast is amasing. James Marsden is magnificent. Giovanni Ribisi is outstanding, his best performance yet. I love how these actors embrassed these roles and it shows in their performances. Searing, engaging, gripping and astonishing. Brilliant, riveting and extroadinary. An explosive action-packed story that grabs you and dosent let go. A truimph. It sets the screen on fire with great power and energy.