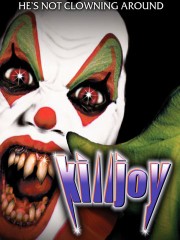 Braiden O
August 7, 2018
This is the greatest movie ever made. A bold, bloody and utterly brilliant masterpiece of modern cinema to say the least. This is one for the history books, my friends.

Tanner M
October 14, 2017
A random movie that I would not recommend. Killjoy is very, very, very bad. Now, it's not the worst movie ever made but, oh boy! It's close. Let's start off by stating how random this movie is. It has teleporting homeless people, a clown who is a bullied kid but at the same time not, and is full of terrible dialogue. Litterky, I bet someone wrote this in a day! The acting is bad, and the clown is not scary In the least but. He has a high squeaky voice, and moves his hands around awkwardly and for no reason. The only thing good about this movie is that the very basic storyline has potential if it were put in better hands.

Allan C
September 4, 2016
Who doesn't love a clown themed horror film? Another goofy attempt at a franchise from Full Moon Pictures maestro Charles Band. This new character is a demonic clown who he and his evil clown minions torment a group of unwitting young adults. Like most Full Moon Pictures, this one is a fairly low budget affair. There're only a few sets, not too many actors, but they do spend the money in the right places on make-up and special effects. And Ángel Vargas as Killjoy is actually pretty darn creepy. I was disappointed to see he did not return for the two sequels. I'm more familiar with the Full Moon Pictures franchises that originated during their VHS heyday, so it's kind of fun to watch some of their newer series. I really don't know what it is, but Charles Band really does have my number.

January 19, 2016
awsoem movie i love clowns some parts were dumb but good movie

Super Reviewer
Harry W
½ May 22, 2015
Reminiscient of films like "Plan Nine From Outer Space" but not intentional whatsoever. It's bad as all hell and isn't enjoyable. See it though, just to see how bad it is. Killjoy could've had strong potential in the horror field, because if there's one thing the genre needs its a really good clown.

Rasheed T
March 9, 2015
My brother said he received it from a friend without saying anything good or bad about it. He was hyped to show a horror film even if it was old but this is probably one of his biggest mistakes when it comes to movies. Me and the big bro watch movies together all the time to talk about our opinions on it. It's a family thing. Moving on though, the movie takes place at a school when a "young man" named Michael is beaten down by a bunch of "gangsters" Lorenzo, T-Bone, and the worst name ever, Baby-boy! Because Lorenzo thought he was hitting his girl. Now, the first part of the movie was just lazy because they beat him up but he doesn't have any bruises, cuts, or any blood on him after kicking his ass! After that I knew that the movie was going to be terrible! Such lack of effort put into a movie that was supposed to be a "horror"!

I don't want to talk about the entire movie but I will go on the terrible parts. 1. The acting was downgraded as can be! It's like you can tell they never acted in a day in their life! Every reaction was like watching a zombie interact! You would think that a killer clown that's teleporting you to a random location out of no where would scare the shit out of you but not exactly in this movie!

2. The choice of dialogue was hilarious! Gangsters actually saying, "Come out, come out! Wherever you are." or "Too many damn times! That's how many times! So, many damn times I've lost count!" you must have been taking kindergarten gangster classes if you think that's good!

3. Death scenes were terribly faked out! And there was only three I believe! One when Baby-Boy is smashed by a trunk in a warehouse! You could tell that he jumped back when the camera closed up on his face! The second one was just T-Bone smoked a random blunt on a gate for no real reason at all besides the fact that he stupid as shit! And the last one was Michael "dying" because Killjoy wiped him out!

I could make a few bad reviews on the plot but just for the fun, I say watch the movie for humor more than horror.

Patrick H
½ November 11, 2014
one of the worst horror movies I ever saw. all i can say is see it for yourself if you want to find out why its that bad...

Shane J
½ October 19, 2014
Prob the worst film you will ever see looks like it was filmed and acted by people off the street. Least the guy playing the clown seemed to be having fun at least

David T
April 24, 2014
Wow, this was bad. It plays out like a later episode of 'Are You Afraid of the Dark?', but with sex, drugs and heavy profanity. Pretty gosh-darned awful, but not without it's occasional chuckles, albeit unintentional. And still not the worst I've seen from Full Moon Features.

The V
April 21, 2014
In this Ghetto comedy slasher flick, a nice black kid who has a fixation with a certain girl is murdered by her boyfriend. The kid had a doll that he tried to bring to life through black magic. One year after the kid's death, a strange clown takes revenge on those that killed the kid. The clown's name is Killjoy and he's not your family friendly clown. He's a demented, blood thirst one who uses tricks in killing off his victims. If Freddy Kruger were a clown, he'd be Killjoy. They share the same wit and live in a nightmare world where they can do whatever they want. This introduction to the character wasn't that bad. It's low budget for sure, but the appeal I found with the whole movie was it's commitment to the character especially when played by Angel Vargas who does a great job as Killjoy. Some of the acting is rather lame and terrible, but that doesn't sway too much from the enjoyment of seeing where this film was going. I would recommend this only if you're into clowns terrorizing people.

Shayne J
½ July 7, 2013
The sequels definitely improve on what this terrible schlockbuster had done wrong, but it's still a terrible torture ride through hell that won't entertain you in the slightest.

Aaron B
July 7, 2013
Imagine Tyler Perry remaking "It" with the change he has in his pocket. That gives you a pretty good idea of what Killjoy is.

Wes S
½ July 2, 2013
Cheaply made, stale humor, and uninteresting characters. The only highlight is the clown, which looks both creepy and great. The ending drags on too far, and the overall plot is lame. Nothing too decent, but at least the clown is worth the watch.

Paul C
½ January 16, 2013
Horrible way to start off a franchise , sub par acting. Pacing was crap , story had a seed of something but just never took off.

John W
½ January 9, 2013
Terrible acting, terrible direction, terrible special effects and quite possibly the worst horror clown...EVER. Not scary, but will annoy you to death.