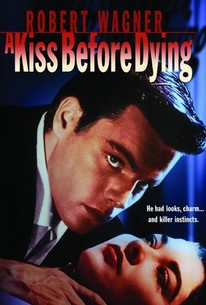 A Kiss Before Dying Videos

A Kiss Before Dying Photos

Budd Corliss (Robert Wagner) is an ambitious, poor boy from the wrong-side-of-the-tracks who murders his girlfriend Dorothy (Joanne Woodward) -- making the death look like a suicide -- when her pregnancy eliminates his chances of being accepted by her wealthy family. Her sister Ellen (Virginia Leith), refusing to believe that Dorothy has committed suicide, begins to investigate on her own. She meets Budd, and ignorant of his prior relationship with Dorothy begins a relationship with him. When Ellen discovers that Budd knew Dorothy, the stage is set for a final, dramatic showdown as Ellen fights to revenge her sister and save her own life. The script, adapted from the novel of the same name written by Ira Levin is excellent and tension-filled. Joanne Woodward is fine in a touching performance as the vulnerable and trusting Dorothy. A wooden performance by Robert Wagner in the pivotal central role mars the film and destroys some of its credibility, as Wagner, though handsome, lacks the charm and charisma necessary to make the character of Budd believable. Also, despite an excellent performance by Mary Astor as Budd's class-conscious, greedy mother, the film fails to achieve any sympathy for Budd or understanding of the motivations that drove him to do what he did.

Critic Reviews for A Kiss Before Dying

This multiple-murder story is an offbeat sort of film, with Robert Wagner portraying a calculating youth who intends to allow nothing to stand in his way to money... Gerd Oswald's restrained direction suits the mood.

Wagner is perfect as the college kid psycho coolly removing the pregnant Woodward from his life.

This is a fine adaptation of Rosemary's Baby author Ira Levin's dark tale about a social climber who kills his wealthy girlfriend when her pregnancy threatens her inheritance.

An excellent screenplay (unoriginal but full of tension), subtle direction by the overlooked and underutilized Oswald, and good photography help gloss over any weaknesses in the performances.

Oswald, who never graduated past B-movies and television, makes masterful use of the frame, pitting his dark thriller elements against a full-color, widescreen frame.

It's a gripping version of Ira Levin's best novel.

This psychological thriller is penned by Ira Levin, of "Rosemary's Baby" fame...

Audience Reviews for A Kiss Before Dying

robert wagner will always be a lightweight. he is just not believable. have to credit director oswald and his dp lucien ballard with some beautiful compositions tho

This movie is a cross between a melodrama and a thriller, which I think is awesome, the story is really good. I highly recommend this movie.

Much better than the remake, Wagner is good but much better is Mary Astor as his mother. Joanne Woodward's part is small.

A Kiss Before Dying Quotes