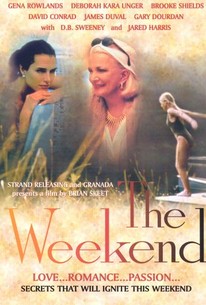 On a summer weekend, John and Marian Kerr, a wealthy couple in their forties, invite Lyle, a gay art critic and former lover of John's half-brother Tony--who died of AIDS exactly a year before--to their country house in upstate New York. Lyle invites his new lover Robert, a poor landscape painter, along for the weekend. The addition of Robert and a visiting neighbor, Laura, disrupts the balance and creates tension between all of them by exposing their common fears. They are each in their own way trying to recapture something that is lost.

Gary Dourdan
as Thierry
View All

Critic Reviews for The Weekend

If I had to spend the weekend with these whiny, pretentious characters, I'd jump in the lake and never come up.

An engaging drama about grief based on a novel by Peter Cameron.

A slow, ponderous and pretentious film, it has a treacly score that fills every crevice of the set.

It gets pretty thick, but, thankfully, some of the performances cut through the preciousness.

There are no featured reviews for The Weekend at this time.