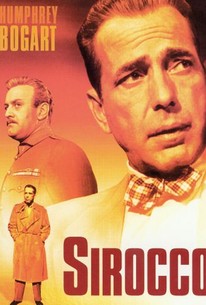 In Sirocco Humphrey Bogart is cast as Harry Smith, a casino operator in 1925 Damascus. For a tidy profit, Smith runs guns to the Arab insurrectionists attempting to overthrow the French Protectorate. Chastised by French Colonel Feroud (Lee J. Cobb) for his lack of morals and political convictions, Smith merely sneers in agreement. Before long, he has become romantically involved with Feroud's mistress Violetta (Marta Toren), who hopes to use Harry as means of escape to Cairo. Only after being betrayed by the Arabs and roughed up by the French authorities does our "hero" begin to behave ethically -- but by then, it's too late. A weak attempt by Bogart's Santana Productions to duplicate the success of Casablanca.

Yet another weak imitation of the leegndary Casablanca, with Bogart (who also produced) playing a similar part to Rick.

A well-acted but predictable spy thriller set in Damascus, in 1925, when the Syrian insurgents conduct guerrilla warfare against their French occupiers.

If Casablanca had a creepy brother with no charisma and shitty friends, Sirocco would be that brother. Humphrey Bogart plays what's supposed to be an unlikable version of his usual character. For the most part Sirocco fails, but the bombing scene and Marta Toren help get you through. Zero Mostel was creepy as shit, especially his scene with David Bond where he's firing off all of these pet names for him. It's not a total waste, just kind of a let down.

Muddled, mediocre Bogart picture. The cast is fine but the script is lacking.