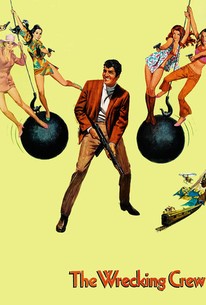 Secret agent Matt Helm (Dean Martin) is called on to stop a plan to steal over one billion dollars in gold. With the help of the fumbling female agent Freya (Sharon Tate), the two race against time to stop the devious plan of Count Contini (Nigel Green) and his henchmen. The Count is aided by a bevy of beauties (Nancy Kwan, Tina Louise and Elke Sommer) who attempt to throw the world economy into chaos with the heist. Comedy, action, drama, fights, murders and martial arts sequences dominate the action. This was the fourth and last time Martin would reprise his role as the smooth super sleuth. Bruce Lee was hired as a technical advisor on the action scenes and trained Sharon Tate extensively in a martial arts crash course. Future action star Chuck Norris has a bit part in this film. Helm is constantly interrupted just before his amorous adventures can be set in motion by the overzealous British agent Freya.

J.B. Peck
as (uncredited)
View All

Critic Reviews for The Wrecking Crew

Quentin Tarantino constructed an entire movie, Once Upon a Time . . . in Hollywood, around it. And if it's good enough for Quentin . . .

The point is never to worry about whether Helm will survive or succeed; it's really just a matter of which female costar will undress to the greatest degree.

The action is deliriously bad, in the way that only a film with a chain-smoking 51-year-old star could have.

The Wrecking Crew is a ghastly end to its franchise, the kind of ugly spy-spoof that time rightfully left far back in the past.

Audience Reviews for The Wrecking Crew

Fluffy day glo spy spoof for those who don"t take their action/adventure too seriously. Dean Martin plays the part of Matt Helm with his typical laid back swagger which is just right for the featherweight material. Not as reliant on gadgetry as the 007 series, probably due to budgetary restraints, this still has some cool set pieces and that swingin' 60's atmosphere. It also has that same 60's sensibility to it's female characters namely viewing them as sex objects and little else, if you're willing to take that into consideration before viewing this is a pleasant way to pass a little time. Aside from Dean the cast is full of beautiful women. Two of those knockouts, Tina Louise, fresh from Gilligan's Island, is in and out of the film in under ten minutes, and Nancy Kwan's part doesn't require much more than her looking great in psychedelic dresses and doing karate chops. It's the other two ladies who make an impact despite the script's rather weak efforts to provide them with anything to work with. Elke Sommer, phenomenally beautiful, manages to be silkily devilish in one stunning outfit after another. The real standout is Sharon Tate as the klutzy but endearing Freya Carlson. This was the tragic beauty's penultimate role before her murder and coupled with her amusing performance in the previous year's Don't Make Waves it shows that she had a very real talent for comedy add into that her lovely looks and she could have had a solid career ahead of her as a glamorous comedienne.