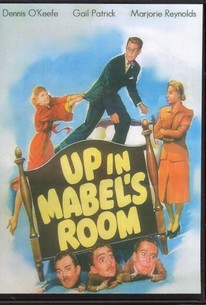 Up In Mabel's Room Photos

Up in Mabel's Room was one of a mid-1940s series of profitable film revivals of venerable theatrical comedies, all produced by Edward Small and directed by Allan Dwan. Previously filmed in 1925, this rusty-dusty stage perennial was written by Otto Harbach and Willson Collison; Tom Reed was the scenarist hired to bring the play's creaky plot contrivances up to date. The story hinges on the fact that newly-married Gary Ainsworth (Dennis O'Keefe) once gave his former sweetheart Mabel (Gail Patrick) a sexy negligee with his initials embroidered in the lacework. It is Gary's unenviable task to retrieve the incriminating undergarment from Mabel's room before his wife Geraldine (Marjorie Reynolds) gets wise. Most of the film's laughs are generated by Mischa Auer as dour manservant Boris.

Harry Hayden
as Justice of the Peace
View All

Critic Reviews for Up In Mabel's Room

One of Dwan's weakest farces, it has a good dream sequence and other nice touches.

Pretty funny farce not much seen these days.

Mistaken identities and double entendres, circa 1948.

There are no featured reviews for Up In Mabel's Room at this time.

Up In Mabel's Room Quotes