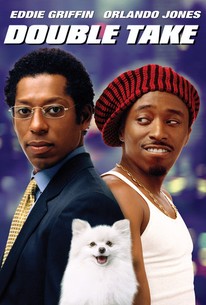 Critics Consensus: Despite a good performance by Orlando Jones, the movie is ruined by a ridiculous, messy plot and fails to generate laughs.

Critics Consensus: Despite a good performance by Orlando Jones, the movie is ruined by a ridiculous, messy plot and fails to generate laughs.

Critic Consensus: Despite a good performance by Orlando Jones, the movie is ruined by a ridiculous, messy plot and fails to generate laughs.

A man trying to run away from trouble finds it follows him in unexpected ways in this action-packed vehicle for comic actors Eddie Griffin and Orlando Jones. Daryl Chase (Jones) is a successful investment banker who handles international accounts for a major New York firm. Chase discovers to his surprise that one of his biggest clients, a company from Mexico, is actually a front for a cartel of drug smugglers; Chase realizes too late that he's been framed for money laundering, and is now wanted by the FBI. Chase is soon approached by a CIA agent, who thinks Chase's relationship with the Mexican drug kingpins might prove useful, but when his local contact disappears, Chase has to make his way to Mexico in order to save his skin and hopefully clear his name. Needing a new identity to get out of town and across the border, Chase obtains a stolen passport -- and soon learns the man whose name he's using is in even deeper trouble with the law than himself. With nowhere else to turn, Chase asks streetwise hustler Freddie Tiffany (Griffin) to help him get out of town; Chase will pretend to be Freddie, while Tiffany will pose as a businessman like Chase. However, Chase finds out Tiffany isn't the man he thought he was, and that his sticky situation is even more perilous and fraught with secrets than he imagined. Double Take was inspired by the 1957 drama Across The Bridge, which was in turn based on a novel by Graham Greene; the supporting cast includes Edward Herrmann, Gary Grubbs, Garcelle Beauvais, and Daniel Roebuck.

Robby Robinson
as Man in Suit

Kevin Will
as NYPD Cop

Shirley Thomas
as Lady by Phone

George Czarnecki
as Bar Patron No. 1

Chelsea Bond
as Waitress at Malibu

Double Take is so convoluted, so unnecessarily mind-boggling, it should be called Quintuple Take.

This is a film that's better than it has any right to be.

It's too violent, too muddled and too pat to be much more than an average evening's entertainment on UPN.

Piling double-cross upon deception at a speed that quickly outpaces the audience's interest in what's happening.

I think Double Take would have worked much better as a simple buddy comedy, without trying to have the plot of a serious thriller.

About the best thing that can be said for Double Take is that the morning after seeing it you don't really remember much about it.

Suffers from a scattershot approach to rapid-fire jokes that usually miss their mark, though Griffin's comedic talents brighten the proceedings and Jones does his part to add his own flavor to the mix.

...this film goes beyond bad; it's borderline racist.

The plot itself is simple. The twists are simply thrown in to make it seem complex.

OMG this movie is comedy!! Definitely one of Eddie Griffin's funniest movies! And Orlando Jones was on point too!

Fun comedy with some twists and turns in it, especially at the end. Eddie Griffin is a comic genious. And Orlando Jones's not bad himself.

I thought this was funny at parts and entertaining. It's not great though and the plot has been seen in a lot of different movies over the years.