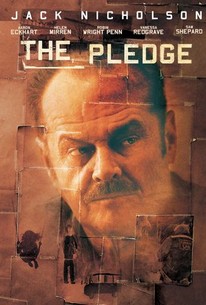 Critics Consensus: Though its subject matter is grim and may make viewers queasy, The Pledge features an excellent, subtle performance by Jack Nicholson.

Critics Consensus: Though its subject matter is grim and may make viewers queasy, The Pledge features an excellent, subtle performance by Jack Nicholson.

Critic Consensus: Though its subject matter is grim and may make viewers queasy, The Pledge features an excellent, subtle performance by Jack Nicholson.

On the day of his retirement, Nevada homicide detective Jerry Black lingers in his office one last time. But when the body of a murdered 8-year-old girl is discovered in the snow-blanketed mountains, the reluctant retiree is unable to step aside. Jerry offers his expertise at the crime scene, and takes it upon himself to deliver the devastating news to the victim's parents. The grieving mother begs Jerry for answers. Faced with the tragic nature of the crime, the parent's suffering and his own uncertainty about life after the police force, Jerry swears on his soul to find the killer. When an ambitious younger cop wrenches a dubious confession from a simple-minded suspect, the case is closed, but not for Jerry. Despite the skepticism of his peers, Jerry follows his hunch that the real killer is still at large and set to strike again. But how far will Jerry go to fulfill his promise? And at what cost?

Gordon May
as Criminologist

Gardiner Millar
as Deputy
View All

News & Interviews for The Pledge

View All The Pledge News

Critic Reviews for The Pledge

Mystery-thriller buffs, promise yourselves that you'll see The Pledge. And while you're at it, be sure to invite along Jack Nicholson fans and anyone who saw the first two movies that Sean Penn directed.

Penn can't be faulted for his work with the actors. Most of the featured players have only a scene or two, but they're indelible.

Ultimately, the payoffs just aren't there, either psychologically or dramatically.

As enthralling as it sometimes is, there isn't any point to the relentless grimness.

An elegant rejoinder to a tired genre, a consummate work of screen adaptation, and further evidence that there is precious little Sean Penn can't achieve on film, whether before or behind the lens.

Penn has accommodated himself to the political and artistic status quo in an unfortunate manner.

Penn intrinsically understands that there can be no epiphanies nor catharsis, as important portents and clues go unanswered as Black drifts into the mire of his obsession.

It's "one last ride" for our leading character Jerry Black (Nicholson), until he abandons the case and retires. It examines a man trying to relinquish his deduction instincts in exchange for a slippery grip on a 'normal' life.

[Penn] sustains a mesmerizing intensity while relentlessly building toward an emotionally wrenching climax.

Sean Penn's agonizing, angst-ridden "The Pledge" feels like a mystery less about murder and more about the inexplicable dangers of impulse and guilt. It's also a waning opportunity to see Jack Nicholson as anything besides a silver-haired hornball.

Its grip is on the mind but not the heart--a problem for a film that clearly aims for some emotional impact.

Audience Reviews for The Pledge

An exceptional character study that grows incredibly suffocating as it leads us to ponder the real motivations behind its protagonist's actions, relying on one of the best performances in Jack Nicholson's career and culminating in a haunting, bitter and fittingly ironic conclusion.

Sean Penn directed this interesting story about the innate fear of ageing, wrapped inside of a murder mystery/hunt for a killer, with a tiny bit of "fuck you" to the culture that makes objects of women (whatever their age) on the side. Because it's Penn there's plenty of quality character actors here (it's a damned acting smorgasbord!), with actor showcase scenes (unnecessary for the story but allowing the actors to preen some) scattered about this not-much-more-than-a-CSI-episode-done-Hollywood-style of a film and therein is where the movie gets legs, gets up, and gets down. The story presented however is as mean-spirited a thing I've seen outside of torture porn. Even the payoff at the feature's close is denied. If you enjoy filmmaking designed to produce stomach upset, this is the work for you.

The Pledge is an average thriller, one that doesn't have anything truly remarkable going for it. The problem I had with the film was that it was a long, tedious affair that really took too much time for the story to unfold. I have nothing against films that do that, but they should at least have something going on to make it truly interesting. That's where The Pledge kinds of falls flat, and never realizes its potential of being a memorable thriller. Luckily, the performances are quite good, or else the film would have ultimately failed in being a watchable affair. I really wanted to enjoy the film, but to me, it tried to outdo its ideas by stretching its story, and in turn, the pacing suffered, and it didn't have a good flow to go with the somewhat effective story. The Pledge is a flawed film, that doesn't necessitate multiple viewings, but it's good and worth seeing, but it's not a memorable thriller either. Sean Penn's direction, is average at best, and he seems to try to hard at conveying a story that feels too ambitious, and he adds too much of a pretentious vibe to the film, which makes the overall on-screen result suffer, and it ends up being a bland, average film that divides viewers. I really wanted to enjoy this one a bit more, but I felt that something was missing to truly make it standout. As it is, it's a good movie, but it's not great either. You'll watch the film, wanting a bit more out of the film, and you'll spend it figuring out that there's something missing to really make it a memorable, stunning thriller.

This is Sean Penn's masterpiece. He has made other really good movies like The Indian Runner and Into The Wild, but this is easily his best. The cast is amazing with possibly the best two roles coming from Mickey Rourke and Benicio Del Toro who both have very little screen time. This is a very unique and chilling movie.