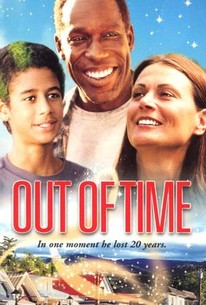 Ernest Thompson, author of the Pulitzer Prize-winning play and Oscar-winning film On Golden Pond, was both director and co-writer of the cable-TV film Out of Time. The story begins in Oregon in 1980, when Jack Epson -- a young business owner, family man, and dedicated environmentalist -- discovers that he has leukemia. While ruminating over his fate, Jack is beckoned into the forests near his home by what seem to be the ghosts of his ancestors, who lure him into a deep sleep. Jack awakens 20 years later, only to find his home town in the grip of an evil land developer, who is now the husband of Jack's "widow" Annie. With the help of his ten-year-old grandson (who gives the "old man" a crash course in 21st century pop culture), Jack tries to make amends for his lengthy absence, and to set things right in his community. It hardly takes a rocket scientist to recognize Out of Time as an update of Washington Irving's Rip Van Winkle; and indeed, Irving is given a posthumous "writing" credit, just in case anyone missed the connection. Co-produced by Tony Danza and starring NYPD Blue's James McDaniel, Out of Time first aired June 18, 2000, on the Showtime network.

Critic Reviews for Out of Time

There are no critic reviews yet for Out of Time. Keep checking Rotten Tomatoes for updates!

Audience Reviews for Out of Time

There are no featured audience reviews yet. Click the link below to see what others say about Out of Time!

Out of Time Quotes