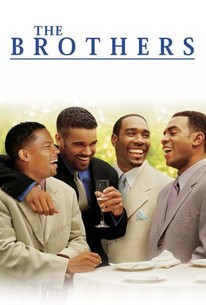 Critics Consensus: Often seen as a Waiting to Exhale with men, The Brothers is amiable. However, it feels superficial and somewhat of a retread.

Critics Consensus: Often seen as a Waiting to Exhale with men, The Brothers is amiable. However, it feels superficial and somewhat of a retread.

Critic Consensus: Often seen as a Waiting to Exhale with men, The Brothers is amiable. However, it feels superficial and somewhat of a retread.

Four successful men find themselves easing into long-term relationships, but they're not all that comfortable about it, in this intelligent comedy-drama. Terry (Shemar Moore), Jackson (Morris Chestnut), Brian (Bill Bellamy), and Derrick (D.L. Hughley) are four close friends who get together once a week to play basketball and compare notes on their problems with women. And as it turns out, they have a lot to say in that area. Terry has just gotten engaged to BeBe (Susan Dalian), who is more than a bit controlling. Jackson has a deep fear of commitment, symbolized by a recurring dream in which he's attacked by women wearing wedding gowns; what's more, he's started seeing Denise (Gabrielle Union), who he learns once had a fling with his dad (Clifton Powell). Brian is a lawyer who has discovered his next court date will see him pleading a case in front of a judge who used to be his girlfriend (Angelle Brooks). And Derrick's marriage to Sheila (Tamala Jones) is falling apart at the seams. The Brothers also features one-time Jeffersons regular Marla Gibbs, and Jennifer Lewis as Jackson's mother, who may be giving his father a second chance after many years apart.

Roland Lewis
as Steve on the Strip

Kim Porter
as Sandra the Temp

Nayo Wallace
as Red the Stripper

Critic Reviews for The Brothers

It's easier to laugh with the movie than take it seriously.

Like candy, this male answer to the 1995 film Waiting to Exhale is sweet, pleasing and goes down easy -- but it's not very filling. Still, it's tasty while it lasts.

If The Brothers falls far short of its prototype, Waiting to Exhale, it still conveys a warm-blooded affection for its characters.

Like its four heroes, The Brothers looks good, knows just what to say, and mostly means well - but still has its faults.

An entertaining but too-familiar comedy about the romantic woes of African-Americans.

One is left with warm memories of laughs, loves, and most of all likable characters with whom one wouldn't mind spending another two hours.

Although it's funny at times and very well intentioned, The Brothers has nothing new to say.

Brothas and Sistas make sure you see this movie!

Audience Reviews for The Brothers

I don't think you'll see movies like this anymore--a film about black brotherhood and the trials of their lives (especially love lives). The market so far is flooded with "he ain't no good" films by Tyler Perry (and sometimes diamond in the rough films) or gangster films full of violence and an absence of positive black female characters. This film was like a black male version of the Sex and the City, obviously made for female viewers. It was entertaining and endearing during its time though feels dated watching it now. If it came on television again years later, I can't say I wouldn't sit down for a dose of nostalgia though.

I happened across this on TV, and it was interesting enough to watch to the end. There is something about a movie where four good friends get together every so often to play basketball and figure out what is going on with their relationships.