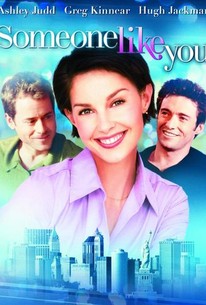 Critics Consensus: A light and predictable, if somewhat shallow, romantic comedy that's easy to sit through because of the charming leads.

Critics Consensus: A light and predictable, if somewhat shallow, romantic comedy that's easy to sit through because of the charming leads.

Critic Consensus: A light and predictable, if somewhat shallow, romantic comedy that's easy to sit through because of the charming leads.

Based on Laura Zigman's 1998 novel Animal Husbandry, this romantic comedy centers on Jane Goodale (Ashley Judd), a talk-show producer who finds herself suddenly abandoned by her boyfriend (Greg Kinnear). After this untimely breakup, Jane begins to develop a thesis that male behavior is directly related to that of wildlife, with similar patterns existing in both. She studies the tendency for animals to be noncommittal and compares men to bulls, dogs, and other creatures. To prove her theories, she enlists the help of her roommate Eddie (Hugh Jackman), a womanizer who falls into all of the patterns of her research. When applying her studies to Eddie, she gains exposure and suddenly becomes a sensation as a pseudonymous sex columnist. This is the second directorial effort from actor Tony Goldwyn, after his 1999 feature A Walk on the Moon. ~ Jason Clark, Rovi

Sabine Singh
as Girl in Bar

Mireille Enos
as Instructor No. 1

Adrienne Burke
as Instructor No. 2

Veronica Webb
as Herself

Inevitability of the plotting and lack of modulated rhythm make the 97-minute running time feel longer than it is.

It's neither clever nor that funny, the starry cast is underused, and the potential for a much wittier script never fulfilled.

It's cheap and it's lowdown, and to those responsible for this exercise in devolution: Honestly, I'm not sure I want to know someone like you.

It's about the most predictable -- and least original -- film you'll see for weeks.

Like cinematic Olestra, it'll slide right through your brain leaving no impression.

In general then, this is a standard rom-com with a decent helping of funny lines, some great supporting performances and two attractive leading characters that you genuinely care about.

A sassy, romantic comedy about the battle of the sexes, Someone Like You is a delight.

So while the plot is weak, and the pop psychiatry it spews is nonsense, thanks to a strong cast, this movie manages to remain enjoyable.

To paraphrase Jane, Someone Like You wants to be the movie version of New Cow, but it's really Old Cow. Or mad cow. Or fractured fairy tale.

Someone Like You clearly tries to go beyond the typical romantic comedy but its failure to do so is all the more painful to watch.

I don't use the word "tripe" very often. But for some reason, during most of the running length of Tony Goldwyn's sappy romantic comedy Someone Like You, that word kept running through my mind.

I like Ashley Judd. I like chick flicks. But this one is very ordinary. Verging on a bit dull.

The soft science about men's natural proclivity to hit-it-then-quit-it isn't terribly scintillating nor monumental. There's not much to this movie, but that kinda makes it somewhat enjoyable. Just some day-to-day dialogue and a couple cute/sad/sweet moments (Jane's cheerleading, Eddie running into Becca at yoga, Eddie looking out for Jane on New Year's). I can't remember the last time I saw a character in a contemporary movie who wasn't a mob boss or a femme fatale light up a cigarette. There is seriously so much smoking! And the mention of WTC really dates the movie.

The story about the one that got away and the one she never saw coming. Fun good movie about adult relationships that easy come by and easy go. You could learn a few things about this movie and apply them to your life, the most logic things in life are probably the one's you should take advantage of. It was very nice story and great actors were involved. Loved the ending, how could you not? After a series of ill-fated relationships, Jane has finally met Mr. Right, Ray - he's emotionally available and not afraid of commitment. Six weeks into their blissful courtship, he asks her to move in with him, and they start looking at apartments. But then Ray starts to pull away, until Jane realizes that she's been dumped. Jane's womanizing coworker, Eddie, is looking for a roommate, and Jane moves in. Desperate to understand what happened and get over Ray, Jane comes up with a theory of interpreting male-female relations by observing the behaviors of animals. She shares this idea with a friend who works at a men's magazine and is given an anonymous editorial column devoted solely to her thoughts on the matter. But no one could have predicted the chord she'd strike among women with her theory, and the column's wild success makes Jane start to question her conclusions - and opens her eyes to what might be right in front of her.

This romantic "cheesy" comedy stars Ashley Judd as Jane Goodale, a talent booker for TV talk show host Diane Roberts (Ellen Barkin). Jane is a woman who is in and out of relationships and not very happy about it,this wacky story makes you not take anything too seriously.