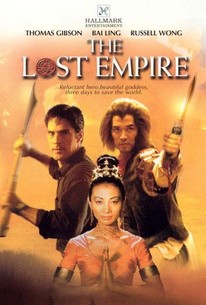 The two-part TV miniseries The Lost Empire was loosely based upon Chang-En Wu's classic 16th century Chinese novel, His Yu Chi (Journey to the West). Updated to the present, the series was set in motion when American journalist Nick Orton (Thomas Gibson) agreed to track down the lost manuscript of Chang-En Wu's masterpiece, which had fallen into the proverbial wrong hands. Accompanied by a curious collection of mythical creatures, including the Monkey King (Russell Wong), a piglike human and a former cannibal, Nick found himself fighting evil and sorcery at every turn, secure in the knowledge that he would win the love of Kwan Ying (Bai Ling), the Goddess of Mercy, if he successfully completed his mission. Filmed partially in Prague by Hallmark Entertainment, The Lost Empire (later released to video as a 132-minute feature titled The Monkey King) was broadcast by NBC on March 11 and 12, 2001.

Critic Reviews for The Lost Empire

MacDonald and editor Colin Green do their best to make all this coherent, but it's a struggle.

Any mini-series that begins in the underground chamber of the ancient Chinese terra-cotta warriors is okay by me.

Audience Reviews for The Lost Empire

There are no featured audience reviews yet. Click the link below to see what others say about The Lost Empire!