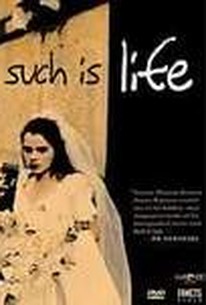 Using digital video and a skeleton crew, master filmmaker Arturo Ripstein boldly reworks the ancient Greek drama Medea, employing a dizzying array of flashbacks and Brechtian devices. The film focuses on Julia (Arcelia Ramirez) who works as an homeopathic doctor. Lovelorn and embittered, she learns that her husband, a failed boxer named Nicolas, has dumped her in favor of a younger woman, Raquel (Francesca Guillen), the daughter of local slumlord La Marrana (Ernesto Yanez). To make matters worse, Nicolas wants to take the kids, while at the same time La Marrana evicts Julia from her modest abode. Julia's growing thirst for vengeance is furthered by her godmother who believes that all men should be castrated. This film was screened at the 2000 Cannes Film Festival. ~ Jonathan Crow, Rovi

Martha Aura
as The Patient

Critic Reviews for Such Is Life

Worthwhile, but more interesting than good.

The overriding fault for this art-house film was that it is not poetic.

The film becomes too much of a one-note rant, ultimately shutting down the viewer's empathy rather than engaging it.

There are no featured reviews for Such Is Life at this time.

Such Is Life Quotes