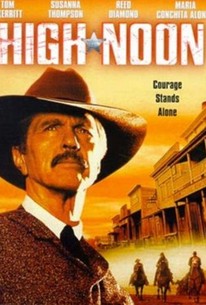 One of Hollywood's most acclaimed Westerns gets a new interpretation in this made-for-TV remake of Fred Zinnemann's 1952 classic. Will Kane (Tom Skerritt), the marshal of the frontier town of Hadleyville, is stepping down to marry his sweetheart Amy (Susanna Thompson) and move on to a less demanding occupation. However, on the day of his wedding, Will gets bad news -- Frank Miller (Michael Madsen), an outlaw Will helped to put behind bars, has just been released from jail and will arrive in Hadleyville on the noon train to settle his score with the marshal. Will appeals for support from the local townspeople, most of whom have done little to help him in the past, and they unfortunately behave in much the same manner in his time of greatest need; Amy even turns her back on her fiancé rather than become a widow on the day of her marriage. In the end, Will finds that he alone must face Miller in a shootout in Hadleyville's main street. Also featuring Dennis Weaver, Maria Conchita Alonso, and Reed Diamond, this version of High Noon was produced for the TNT cable network, where it first aired on August 20, 2000.

Tom Skerritt
as Will Kane

Without Tex Ritter's performance of the Dimitri Tiomkin theme song, "High Noon (Do Not Forsake Me)," this copycat crime is just asking for capital punishment.

There are no featured audience reviews yet. Click the link below to see what others say about High Noon!