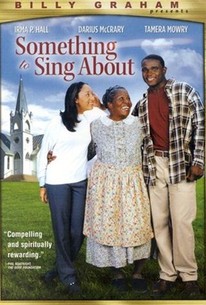 Something to Sing About tells the story of TNT (Family Matters' Darius McCrary), an African-American ex-con. While TNT is standing in a grocery store aisle, an elderly woman named Memaw (Irma P. Hall, Patch Adams) overhears him singing and admires his voice. She invites him into her home, feeds him, and ultimately helps lead him to Christ by turning her television to a ministerial broadcast during supper. Now reformed -- with a new recycling job that he finds through one of Memaw's friends -- TNT begins a romance with Memaw's granddaughter Lilly (Tamera Mowry, Sister, Sister) and finds new life in the church choir. But a friend steeped in gang violence, and disapproval from a local elderly man threaten to dampen TNT's spirits -- until a surprising twist brings him unexpected media exposure and attention as a singer. Produced by Billy Graham through his World Wide Pictures video label, Something to Sing About is a warmhearted, family-oriented drama with evangelical Christian themes.

Critic Reviews for Something To Sing About

There are no critic reviews yet for Something To Sing About. Keep checking Rotten Tomatoes for updates!

Audience Reviews for Something To Sing About

There are no featured audience reviews yet. Click the link below to see what others say about Something To Sing About!

Something To Sing About Quotes