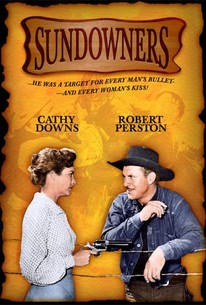 Filmed in a two-tone process called Cinecolor, The Sundowners is a compact little western making good use of an old Hollywood chestnut. Robert Preston and Robert Sterling play two brothers who find themselves on opposite sides of the legal fence. Since Sterling rather than Preston has the mustache this time, Sterling's the bad guy. Caught in the crossfire is Preston's son, who is menaced by Sterling. This 1950 version should not be confused with the 1960 Warners film of the same name, which is set on an Australian sheep ranch.

Dave Kashner
as Batson
View All

Critic Reviews for The Sundowners

There are no critic reviews yet for The Sundowners. Keep checking Rotten Tomatoes for updates!

Audience Reviews for The Sundowners

There are no featured audience reviews yet. Click the link below to see what others say about The Sundowners!