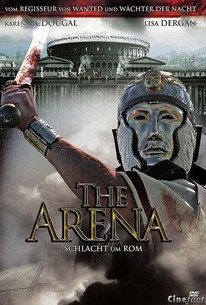 Gladiator undergoes a gender reassignment in this period action-drama. In ancient Rome, the decadent appetite of corrupt Governor Timarchus (Victor Verzbitsky) is no longer satisfied by the site of men battling to the death. Jessemina (Karen McDougal) is a slave who must obey the whims of her Roman overlords and Bodicia (Lisa Dergan) is a Druid who was abducted by Roman troops after her family was slaughtered. As Jessemina and Bodicia are forced to serve their Roman masters, they become friends, but they are made bitter rivals when Timarchus decides to add a new wrinkle to the tournaments and decrees that women will forced to fight for their lives -- and Jessemina and Bodicia are pitted against one another. The Arena (also screened as Gladiatrix) is a remake of Steve Carver's 1973 exploitation cult item of the same name, which starred Pam Grier and Margaret Markov as the battling Amazons; incidentally, this version's female leads, Karen McDougal and Lisa Dergan, were both "Playmate of the Month" models for Playboy Magazine in the late '90s.

Critic Reviews for The Arena

It's mostly an excuse to show off the bodies of former Playboy Playmates Karen McDougal and Lisa Dergan.

There are no featured reviews for The Arena at this time.