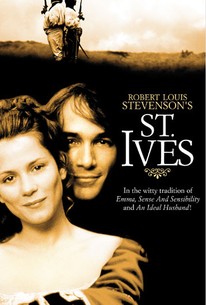 Based on the novel by Scottish author Robert Louis Stevenson, this film version of St. Ives is a romantic costume adventure set during the end of the Napoleonic Wars. The dashing Jacques St. Ives (Jean Marc Barr) is an officer in the French army who slips and literally falls into the hands of the British army. He is summarily locked up in a Scottish prison where he fortuitously gains the fancy of the young and beautiful Flora (Anna Friel). Flora and her aunt Miss Gilchrist (Miranda Richardson) help St. Ives escape in order to reunite him with the grandfather (Michael Gough) who thought St. Ives was killed years ago. But the celebration is cut short as St. Ives' embittered brother (Jason Isaacs) decides he doesn't wish to share his inheritance. The ensuing conflict produces numerous sword fights, a hot air balloon chase, adventures with warring armies, and a climactic wedding.

Friel is a dull, cold fish