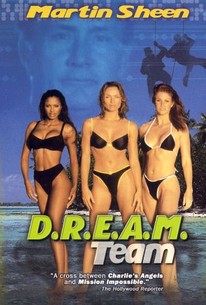 Three female undercover agents fight evil and look good doing it in this made-for-TV action-adventure drama. While Puerto Rico may be a playground for the rich and famous in the eyes of the world, United Nations intelligence agent J.W. Garrison (Martin Sheen) and his CIA colleague Zack Hamilton (Jeff Kaake) discover that all is not well on the island -- a team of terrorists have set up shop in Puerto Rico, and are working on an anthrax bomb which could cause millions of deaths in the United States. Needing to infiltrate the terrorists before it's too late, Garrison and Hamilton call in the Dangerous Reconnaissance Emergency Action Mission Team -- the D.R.E.A.M. Team for short -- which consists of Kim Taylor (Angie Everhart), Eva Kirov (Eva Halina), and Victoria Carrera (Traci Bingham), three highly skilled secret agents posing as international supermodels. While mingling with the upper crust between photo shoots, the D.R.E.A.M. Team meet a business mogul whose plans for his U.S. operations may be less than benign. D.R.E.A.M. Team was the pilot film for a short-lived television show; Martin Sheen did not appear in the series, but Roger Moore stepped in to play a similar role. James Remar and Traci Lords also appeared in the pilot.

There are no critic reviews yet for D.R.E.A.M. Team. Keep checking Rotten Tomatoes for updates!

There are no featured reviews for D.R.E.A.M. Team at this time.