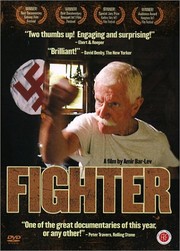 Jason A
April 11, 2011
Fascinating and complex documentary about the road trip undertaken by two Holocaust survivors back to the sites that defined their lives. Amir Bar-Lev's (My Kid Could Paint That, The Tillman Story) first film.

Charmian C
November 30, 2010
The Fighter is a raw emotive experience that get you Shadow Boxing in the theatre "wow" brilliant performance by Walhberg and Bale...if you are a movielover its the must see film of the year and my wife loved the film and mark of course....

Andy A
July 19, 2007
A great documentary that relies on the reality of its two stars for the drama as opposed to enhancing it with talking heads. Also, Arnold Lustig is one cool dude.

Dave P
½ November 24, 2006
I thought I was done with documentaries but a well done doc is probably the most deeply satisfying movie experience around. Fighter did not disappoint.

Fighter is about a air fighter in WW2, Jan Weiner...he also just happens to be one of the men in the documentary - but the film is not about the real man, but the story of the man who was a fighter. The film follow two friends (one the principal the other a writer, Arnost Lustig) on a tour of his flight in Europe during the war.

This movie is about the subjectivity of history...how any story can be seen from different angles and even the one who is in the center of the story has only one part of the story to tell.

This movie is also about 2 men trying to hang onto a friendship despite their different ideas and experiences vis a vis a very controversial part of our history, that being the Nazis and the communists. You see, its one thing to have a different opinion on something benign, say the weather or the whether the Canucks should play the back up goalie more often - its very easy to be connected and friends...but take issues into which we both invest real importance, our children, our bank account, our sex life, then we shall see how well we tolerate difference in the other and even in ourselves.

Herein lies the genius of film as art...you take a very basic/simple idea: we look at things from a different perspective...and then you allow that idea to be focussed upon through these very lovely and complex conversations and contexts and then suddenly you say to yourself "WOW, all of us, we look at things from such different perspectives...we are not trying to be the center of pain for another...we are simply different"...such is the genius of film.

In a brilliant soliloquy, Lustig reminds us that it is only the rare person who becomes a hero who stands up and fights the bad in society...most of us are sad when someone dies but deep down are silently glad it is him and not me...and this is observed without contempt.

Director Amir Bar-Lev has made a movie to be listened to more than watched. Its more like My Dinner with Andre in the sense that it is within the dialogue and the ideas that the power of the film is experienced.
Page 1 of 1