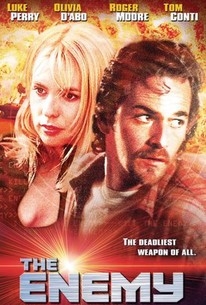 In this tense action thriller, Mike Ashton (Luke Perry) is a scientist working in genetics whose father was also a scientist. However, the senior Ashton once made the mistake of using his talents to create a dangerous biochemical weapon, and now years later Mike finds himself the target of terrorists as a result of his father's work. After his father is abducted, Mike finds himself working with a beautiful but tough as nails police detective (Olivia D'Abo); he has two goals in mind -- to find his dad, and to create an antidote to his father's poison before it's too late. The Enemy also stars Roger Moore, Tom Conti, and Horst Buchholz.

Critic Reviews for The Enemy

Here's all you need to know about The Enemy: the 'action hero' is played by Luke Perry. That's right: Luke. Perry.

There are no featured reviews for The Enemy at this time.