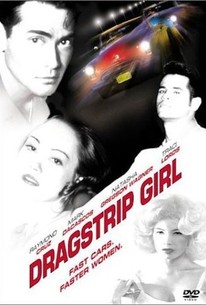 In this drama about juvenile delinquents on the prowl, Johnny (Mark Dacascos) is a parking attendant who wants better things out of life, and isn't above bending the law to get them. Johnny is in cahoots with a ring of car thieves who swipe valuable automobiles and sell the parts for whatever the market will bear. Johnny also has his eyes on Laura (Natasha Gregson Wagner), a beautiful girl with a fast car, but he soon finds out the hard way that working class Latinos who date upper-crust white girls are not looked upon kindly by much of the community. Dragstrip Girl is a in-name-only remake of the 1957 Fay Spain vehicle of the same name; it was produced for the Showtime premium cable network as part of their "Rebel Highway" series (consisting of remakes of classic teen exploitation films from American-International Pictures.

Raymond Cruz
as Doogie
View All

That Dragstrip Girl inspires core disquiet because of its confounding badness is probably not reason enough to see it.

You could make a worse movie than Dragstrip Girl, but you'd really have to try awful hard.

There are no featured reviews for Dragstrip Girl at this time.