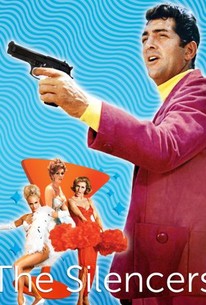 Columbia Pictures tried to create a tongue-in-cheek American James Bond with this, the first of five motion pictures based on the character of Matt Helm, a spy created in a series of novels by Donald Hamilton. Dean Martin stars as Helm, a boozing, womanizing cad of a spy coaxed out of retirement by ex-girlfriend Tina Batori (Daliah Lavi). His mission: stop the evil Big O organization, whose leader, Tung-Tze (Victor Buono), schemes to sabotage an atomic missile and thus spark World War III. Producer Irving Allen had once been partners with Albert R. Broccoli in the British film production company Warwick Films, their alliance ironically disintegrating over the merits of creating a Bond series. When Broccoli's instincts proved correct, Allen attempted to create his own spy franchise with the Helm character. The sequels to The Silencers (1966) were Murderers' Row (1966), The Ambushers (1967), and The Wrecking Crew (1968). Allen unsuccessfully tried to resurrect the character as a TV movie, Matt Helm (1975).

Pat Hawley
as Eddie, the Bartender

Cosmo Sardo
as Bit
View All

Critic Reviews for The Silencers

The total effect is overblown sensationalism on the tawdry side.

Audience Reviews for The Silencers

an entertaining spy romp. no more ridiculous or tongue-in-cheek than some of the lesser Roger Moore Bond films. Dean Martin tries to be Cary Grant in a few scenes.