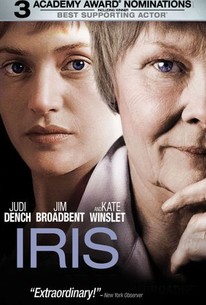 Critics Consensus: A solidly constructed drama, Iris is greatly elevated by the strength of its four lead performances.

Critics Consensus: A solidly constructed drama, Iris is greatly elevated by the strength of its four lead performances.

Critic Consensus: A solidly constructed drama, Iris is greatly elevated by the strength of its four lead performances.

Based on a pair of memoirs by her husband John Bayley, this biographical portrait of writer Iris Murdoch stars both Judi Dench and Kate Winslet as the philosophical author at different stages of her life. When the young Iris (Winslet) meets fellow student Bayley (Hugh Bonneville) at Oxford, he's a naïve virgin easily flummoxed by her libertine spirit, arch personality, and obvious artistic talent. Decades later, little has changed as the couple (now played by Dench and Jim Broadbent) keeps house, with John doting on his more famous wife. When Iris begins experiencing forgetfulness and dementia, however, the ever-doltish but devoted John struggles with hopelessness and frustration to become her caretaker, as his wife's mind deteriorates from the ravages of Alzheimer's disease. Iris earned a slew of Supporting Actor awards for Broadbent, including recognition from the Hollywood Foreign Press Association, Los Angeles Film Critics Association, and National Board of Review. ~ Karl Williams, Rovi

[The] performances, if nothing else, embody a standard of excellence that Iris Murdoch herself would surely have cheered.

The impoverished story keeps Iris from achieving greatness, but no qualifiers are needed for the acting.

For a movie whose subject is the decline and fall of a towering intellect, there's precious little to think about here.

There are not two, but four sterling performances here.

Not just a fitting document of a life brilliantly lived but a vibrant, almost palpitating piece of cinema.

This in an informative, well-acted biopic of a woman whose life's work deserves to be preserved and remembered.

Admittedly, it's hard not to be affected.

Despite good acting from the two pairs, viewers expecting illuminating insights about the literary genius, eccentric philosophy and complex sexuality of Iris Murdoch will be disappointed by Richard Eyre's minor, rambling, TV-like film.

...Iris isn't necessarily an enjoyable piece of work, though it's certainly interesting...

There is not a slouch in this film, in front of or behind the camera.

Whilst the performances and cast we very good and well suited to each other, I feel like this is supposed to make Iris look like a great person who had a brilliant life but what I saw was completely to the contrary. They showcased Iris to be a selfish, horrible and uncaring woman who only has a sense of humanity when she becomes ill. Her poor husband John who she treated terribly should have left her the moment he met her. Really didn't enjoy this film at all.

Heart wrenching true story of the remarkable life of Iris Murdoch and her utterly devoted husband John Bayley. I found myself having flashbacks of The Notebook and of my own grandmother's spiraling decline into darkness. God damn Alzheimer's disease.

Each individual performance was influenced by the actual character, but personality leaked in undoubtedly. Judi Dench, so utterly amazingly, took on Alzheimer's without her usual grace, which not only surpirsed me, but made me respect her more. Winslet was her usual whimsical self, and Broadbent, the cooky man of the hour, put on the appearance of a man with little left in life. Beautiful, and scary, it would have been much better had they focused more on Iris' past, and less on her later years.

While I watched this film, I enjoyed it. i enjoyed Dench's convincing portrayal of the Alzheimer's-afflicted Murdoch and Winslet as the vivacious younger Murdoch, and I was astounded by Jim Broadbent, who deserved the Oscar for Murdoch's stuttering, inferior-complex-afflicted, devoted husband. He is truly fantastic in this role. But as I thought about the film, I realized just how eminently forgettable it is. Not only is it thin on plot, the narrative structure - with multiple flashbacks and half-scenes - actually detracts from the dramatic impact of the story. Attention story-tellers of all ilks: this is how *not* to do fractured time. Just because Tarantino can make it work, doesn't mean everyone else can. Also, for a moment, the Dench/Broadbent storyline seems to echo A Beautiful Mind, and we are mercifully given a central, driving goal, but this is unfortunately abandoned, and more rousing violins play. Thank heavens for Broadbent, who almost makes it all worth it.